These players are focusing on organic growth strategies such as acquisitions and mergers, business expansion and collaborate in order to strengthen their market position. Apart from this, manufacturers are focusing towards manufacturing of integrated PVB sheets & films to server a large number of customers located across the world.

According to TMR, the polyvinyl buyral films sheets market is projected to grow at a impressive CAGR during the forecast period.

On the basis of region, Asia-Pacific is expected to dominate the global polyvinyl butyral films sheets market during the forecast period of 2018 to 2023. This is mainly because of the rapidly expanding automotive and construction industries in the such as China and India. Based on end user, building & construction segment is projected to hold around a two-fourths share of the global PVB films & sheets market. 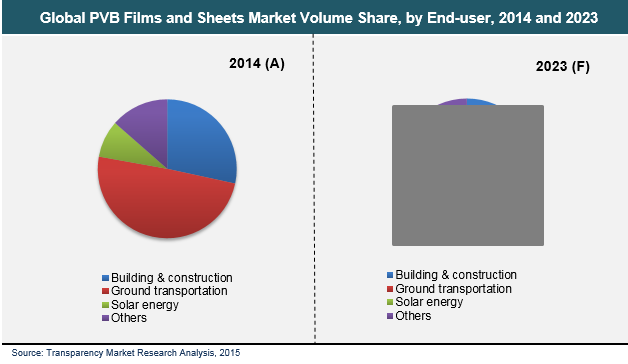 Polyvinyl butyral films sheets are manufactured by condensation reaction of polyvinyl alcohol (PVA) and n-butyraldehyde. Further, they are blended with nitrocellulose and ketone resin in order to increase its hardness. The properties of polyvinyl butyral films sheets such as transparency, impact resistance, high tensile strength, and elasticity are the prominent factor expected to increase end use application of the sheets. The mentioned properties make these sheet suitable for manufacturing of safety glass. Other than this, they are also used in building & construction, ground transportation and solar energy.

Adverse Effect of Polyvinyl on Environment to Hamper Market Growth

However, other factor such as increasing demand for PVB films and sheets for manufacturing of automotive windshields is anothet prominent factor expected to boost the polyvinyl butyral films market. This is mainly due to unprecendtal growth in the automotive industries.

The report segments the global PVB films and sheets market into: