According to a new market report published by Transparency Market Research , the global optical satellite communication market is expected to reach a value of US$ 4,238.7 Mn by 2027, due to rising demand for high data rate. The market is projected to expand at a CAGR of 31.5% during the forecast period from 2019 to 2027. North America is expected to hold the dominant position in the market followed by Europe and Asia Pacific during the forecast period. 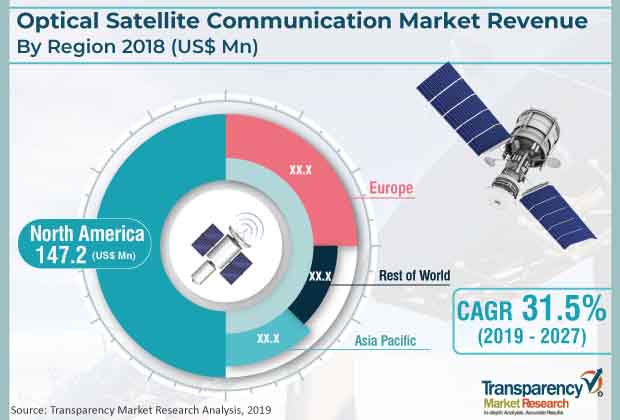 The optical satellite communication market has been segmented based on component, application, and region. On the basis of component, the market is segmented into transmitter, receiver, modulator, demodulator, and others. According to the research, the transmitter segment held the dominant position in the market and is expected to retain its dominance throughout the forecast period. Increasing demand for high speed data transfer from satellite-to-ground is one of the major factors responsible for the expansion of the segment. High data rates have increased the demand for continuous R&D in optical satellite communication components.

On the basis of region, the market has been segmented into North America, Europe, Asia Pacific, Middle East & Africa, and South America. North America held the dominant position in the market in 2017 and is expected to retain its dominance throughout the forecast period. The U.S. and Canada are the major driving engines of this region. High spending for space projects from government bodies of countries in North America is a major factor driving the market in the region. For instance, according to Space Foundation, in 2017, the U.S. accounted for 57% of global government space spending. In 2019, NASA's Laser Communication Relay Demonstration project plans to launch an optical data relay satellite system into the geostationary orbit. In addition, significant presence of market players in countries of North America is also a major reason for the dominant position of the region in the global market.

The global optical satellite communication market is segmented as below: