The competitive landscape in the North America sulfur dioxide market witnesses the presence of globally prominent and local chemical manufacturers and producers, finds Transparency Market Research (TMR). Key players operating in the North America sulfur dioxide market are Esseco Group, PVS Chemicals Inc., Grillo-Werke AG, Calabrian Corporation, Chemtrade Logistics Inc., Kemira Oyj, the Linde Group, INEOS Group, and Praxair Technology, Inc. TMR notes that several prominent players have been leveraging the potential of robust distribution channels to market their products among a wider end-user base across North America. This has also led them maintain they sway in the regional market and stay ahead of their competitors. 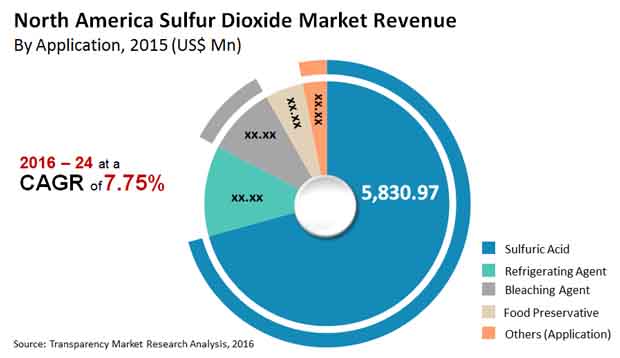 Geographically, the U.S. and Canada are broadly two regional markets in North America. Of the two, the U.S. is the clear winner with substantial demand for sulfur dioxide. Through the demand is maturing, the U.S. economy is making rapid strides which will make room for more prospects in the regional market.

The North America market for sulfur dioxide is driven primarily by the extensive application of sulfur dioxide in the manufacture of sodium hydrosulfite, a             prominent bleaching agent used in the pulp and paper industry. The rapid strides that the paper and pulp industry is expected to come from the revival of paper recycling industry. The market is also driven by the rising industrial applications, such as for manufacturing sulfuric acid, sulfur trioxide, and sulfites in the region. The extensive usage of the chemical compound as refrigerants, disinfectants, reducing agents, food preservatives, and pharmaceutical aids is accentuating the growth of the regional market.

Nevertheless, the North America market will witness attractive opportunities from the demand for sulfur dioxide in making several industrial chemicals in the region. Moreover, the widespread usage of sulfur dioxide in pest control equipment and bleaching agents is catalyzing the growth of the regional market.

The North America sulfur dioxide market is segmented based on: