Transparency Market Research has released a new market report titled “Monorail System Market - Global Industry Analysis, Size, Share, Growth, Trends, and Forecast, 2018–2026.” According to the report, in terms of revenue, the global monorail system market is predicted to expand at a CAGR of about 22% during the forecast period.

Trains are cost-effective and considerably less polluting mode of transportation and hence, governing bodies are preferring to expand train connectivity in order to enhance train transportation. Internal combustion engine vehicles are a major source of pollution. Therefore, governing bodies are focused on increasing the adoption of other modes of transportation that are less polluting, such as trains. Monorails are a significantly less polluting and faster mode of transportation. Monorails require significantly lesser space than that of conventional trains, and hence, these are more suitable for urban areas where lack of space is a concern. Rapid urbanization occurring due to enhanced job opportunities, increase in number of on-road vehicles due to rise in per capita income, and enlarging urban areas are fueling the demand for faster, safer, and economical modes of transportation, which in turn is fueling the demand for monorail systems. Moreover, the construction of monorail systems is much easier and requires significantly lower expenditure. Consequently, governing bodies, especially across developing nations, are preferring to incorporate the monorail system in densely populated urban areas. 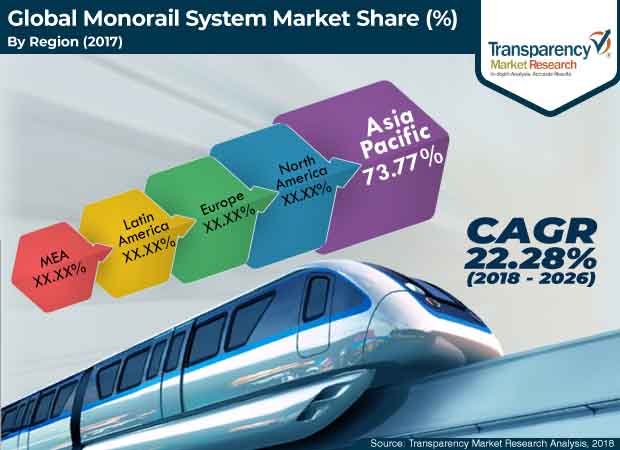 Demand for monorail systems is rising in China, India, and ASEAN countries, which is primarily attributed to the rapid urbanization in these countries. Enlarging urban area, increased migration of people from villages to urban areas due to better income opportunities, and increase in number of daily commuters are increasing the burden over mass transit systems in densely populated areas across these nations. India and ASEAN countries have a bunch of proposed monorail system projects, and hence, Asia Pacific region is estimated to hold a major share of the global monorail system market during the forecast period. Several countries across Latin America and Middle East & Africa are primarily focused on enhancing train connectivity across urban areas, which is likely to offer lucrative opportunities to the monorail system market in these regions.

The global monorail system market has been segmented as follows: