Mixed reality (MR) refers to an emerging technology that merges both virtual and real worlds to generate new visualizations and environments, wherein both digital and physical objects exists side by side in real time. Users see the real world with virtual objects and can interact with those objects. The global mixed reality in gaming market is likely to be driven by exponential growth of the gaming industry. 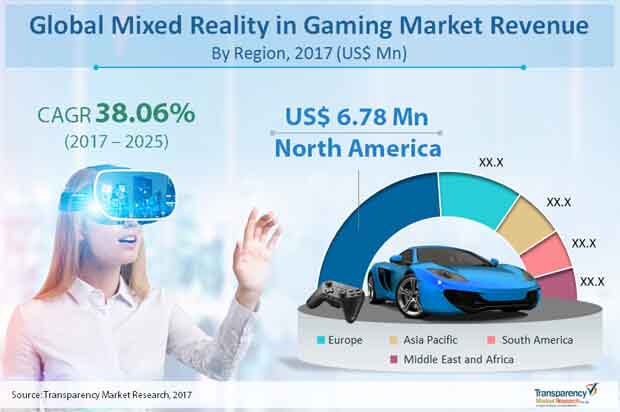 Europe is expected to come up as another significant region for the global mixed reality in gaming market over the period of assessment, from 2017 to 2025. The regional growth of the Europe mixed reality in gaming market is likely to be driven by the U.K. and Germany. Rapid penetration of smart devices such as smartphones, tablets in Europe is expected to encourage growth of the market in the region. In addition, growing adoption of Internet of things for use across several applications is likely to offer a wide scope for the mixed reality in gaming market in Europe. Countries such as Japan, China, and India are estimated to offer lucrative growth opportunities for the market in the region over the timeframe of forecast.

Growing Popularity amongst the Younger Generation to Influence Market Growth

Furthermore, adoption of smartphones with mobile data technology built into it has observed an unstoppable growth in the last few years, which is spurring the demand of informative and entertainment apps. Mixed reality enabled gaming applications are gaining traction particularly amongst the younger generation, which is driving the global mixed reality in gaming market.

The information shared in this review is based on a TMR report, bearing the title, “Mixed reality in gaming market (Component - Software and Mobile Apps; Application - Entertainment and Training/Learning; End Use - Government, Corporate, Theme Parks, and Personal) - Global Industry Analysis, Size, Share, Growth, Trends and Forecast, 2017 to 2025”

The global mixed reality in gaming is segmented based on: