The large-scale LNG terminals market has been attracting sizable investments by hydrocarbon companies on the back of rising demands for natural gas either as feedstock or as environmentally friendly energy sources, notes Transparency Market Research (TMR). Constructions of large-scale LNG terminals especially in developed nations are fast making strides, helped by favorable government regulations and several other initiatives. In various developing and developed countries, particularly North America and South America, the large-scale LNG terminals market has gained a striking momentum with the policy catalysis in promoting LNG as replacement of costlier petroleum-based fuels.

Numerous top players in the large-scale LNG terminals market have sought leadership position by investment sizably in setting and consolidating handling and distribution facilities. Rising volumes of natural gas transported around the world has imparted a robust momentum to the expansion of the market. TMR observes that as the trend is likely to continue, the intensity of competition in the large-scale LNG terminals market is expected to increase further. 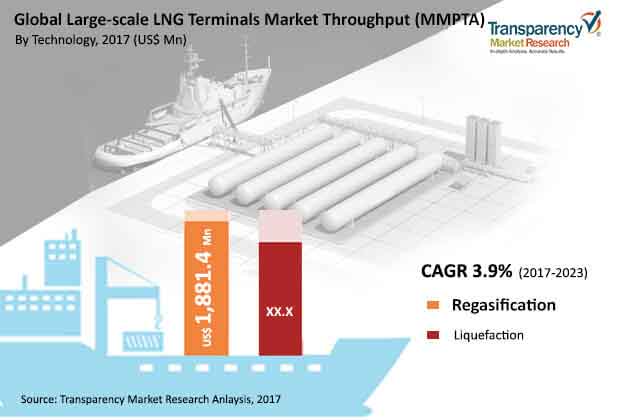 Some of the prominent names in the large-scale LNG terminals market are ExxonMobil, Nippon, Conoco Phillips Company, and Royal Dutch Shell plc.

Advances in regasification systems have helped bolster import and export of LNG, thus catalyzing prospects in the large-scale LNG terminals market. The technology has been receiving considerable interest of stakeholders pertaining to LNG transportation and distribution.

The growth in the global large-scale LNG terminals market has also been fueled increasingly by the implementation of environmental regulations that promote reduction of emissions. These regulations are increasingly helping in bringing down the emission of NOX, SOX, and carbon dioxide from the energy and oil industries. The growing demand for LNG in hydrogen production in numerous countries around the world is also boosting the market. The significantly low footprint associated with the burning of LNG has made it occupy a key position as one of the cleaner fossil fuels of the globe.

Rising use of LNG as a fuel in heavy road transport is a key factor driving the large-scale LNG terminals market. Regions at the forefront in the uptake are North America, Europe, and Asia. Governments in these countries have intensified their efforts to strengthen LNG infrastructures on improving the access and availability of the energy source. Another stimulating factor contributing to the investments of these regions in large-scale LNG terminals is the worldwide focus of fuel supply security. Moreover, the maritime industry in these and several other countries have started taking interest in LNG to maintain their competitiveness.