According to the TMR report, the global thin and ultra-thin films market had an opportunity worth US$32.78 bn in 2015, which will increment up to US$115.41 bn by the end of 2024, exhibiting a strong CAGR of 15.1% during the forecast period of 2016 to 2024. Product innovation is the need of the hour in this market as poor conversion efficiency of thin film solar cells and complex construction structure are posing significant challenges for the vendors. 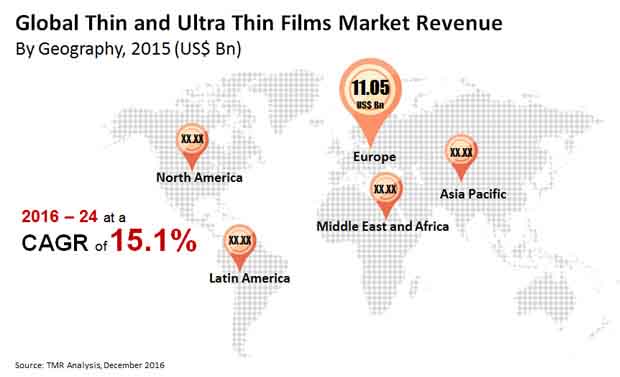 By end-user, the report segments the global thin and ultra-thin films market into electronics, batteries, photovoltaic, and others including optoelectronics and defense and military. Out of these, thin film electronics segment is most profitable, accounting for nearly 75% of the demand in 2015. This is a reflection of incremented usage of thin and ultra-thin films in microelectronics, mobiles, tablets, TVs, and other electronic devices. Moreover, evolving sector of the Internet of Things and internet connectivity will further fuel the demand for thin film electronics segment. By technology, the report bifurcates the market into printing and deposition process including physical vapor deposition (PVD) and chemical vapor deposition (CVD). In the market at its current state, printing technology is most profitable, gaining from its cost-efficient features with added flexibility.

Geographically, the report studies the lucrativeness of all the important regions including North America, Europe, the Middle East and Africa, Asia Pacific, and Latin America. Currently, Asia Pacific is most important region for the vendors in this market, expected to expand at most prominent CAGR of 24.1% during the forecast period.

The thickness of thin and ultra-thin films ranges from micrometer to fractions of a nanometer, and are used as layers of several materials spread over a substrate to enhance its properties such as adding environmental protection. Various process of generation of thin films are utilized by various end users such as physical or chemical vapor deposition, and printing on electronic devices.

The increasing preference of printed electronics over thin and ultra-thin films for ongoing miniaturization in electronics and semiconductor industry is the primary driver of the global thin and ultra-thin films market, besides developing field of nanotechnology and growing demand for cost-efficient renewable energy sources. Solar cells, electronic semiconductor devices, and optical coatings are the most important applications gaining from thin film construction. The developments in nanotechnology related to several verticals of materials science as well as increasing usage of these films for food and medical packaging are other factors augmenting the demand.

According to the author of the report, “Environment organizations such as EPA, Department of Energy Resources, and Greenpeace are opening new avenues for the players in the thin and ultra-thin films market by regulating the minimization of carbon footprints, and thereby fueling the demand for renewable energy source such as photovoltaic cells.” The author finds that traditional crystalline cells have a low absorption rate and are considerably costly than thin film PV cells. The flexibility of these thin film PV enables them to be laid down on any kind of surface and are less susceptible to damage.

Key Segments of the Global Thin and Ultra-thin Films Market