Global Contrast Media Market to Reach over US$ 6,500.0 Mn by 2026; Increase in Pre-diagnosis of Diseases to Fuel Market Growth: Transparency Market Research

Transparency Market Research (TMR) has published a new report titled, “Contrast Media Market - Global Industry Analysis, Size, Share, Growth, Trends, and Forecast, 2018–2026”. According to the report, the global contrast media market was valued at US$ 4,600 Mn in 2016 and is projected to expand at a CAGR of 4% from 2018 to 2026. The report suggests that rise in awareness among people about pre-diagnosis of diseases such as cancer and cardiovascular is expected to drive the global market during the forecast period. North America and Europe are anticipated to dominate the global contrast media market in the next few years owing to increase in installed base of imaging equipment and high health care spending. Asia Pacific is expected to be the fastest growing market by 2026. This is attributed to increase in geriatric population and rise in awareness about benefits of pre-diagnosis in developed countries such as Japan and Australia. Development of novel contrast media and advanced contrast media injectors is likely to fuel the growth of the global market. The market in Asia Pacific is projected to expand at a CAGR of 3% to 4% from 2018 to 2026. 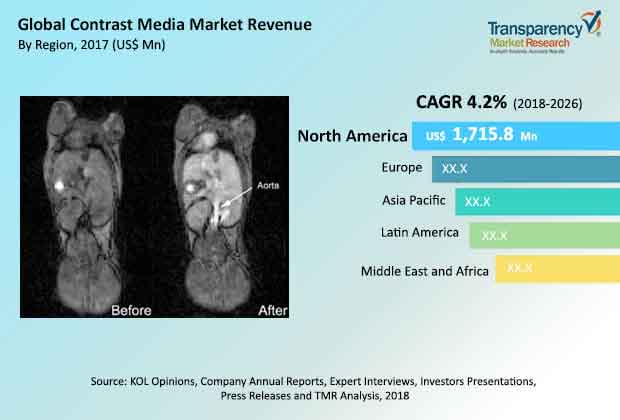 High prevalence of cancers such as breast cancer is a major factor fueling the growth of the global contrast media market. Increase in popularity of pre-diagnosis of breast cancer and colorectal cancer using imaging equipment is another factor anticipated to drive the global market during the forecast period. Rise in cardiovascular diseases that require identification of high risk patients and implementation of disease management made possible through medical imaging are the other factors expected to boost the growth of the global market from 2018 to 2026. Furthermore, strong R&D, upcoming pipeline imaging drugs, and increase in health care spending are the factors likely to augment the global market during the forecast period. Stringent regulatory scenarios and adverse effects of contrast media in large number of patients are projected to restrain the global contrast media market from 2018 to 2026.

The report offers detailed segmentation of the global contrast media market based on type, route of administration, imaging modality, and application. In terms of type, the iodine-based compounds segment is poised to account for leading share of the global market during the forecast period from 2018 to 2026. Factors attributed to the higher share of the segment include early detection of diseases including cancer, detection of asymptomatic heart diseases, and low osmolality of the compounds. The iodine based compound segment accounted for over 30% share of the global market in terms of revenue in 2017. Based on route of administration, the global market has been classified into oral, rectal, intravenous/intra-arterial, and others. The intravenous/intra-arterial segment dominated the global market, accounting for over 30% share in 2017. The oral segment is expected to grow at a rapid pace during the forecast period due to increase in usage of oral contrast agents for gastrointestinal tract imaging.

CT / X-ray and Cardiology Segments to Dominate the Market

Asia Pacific is the fastest growing market for contrast media. The market in the region is likely to expand at a CAGR of 4% to 5% during the forecast period. Increase in population, rise in prevalence of cardiovascular diseases, and surge in musculoskeletal problems are the major factors fueling the growth of the market in the region. Australia, Japan, India, and China are the potential markets for contrast media in Asia Pacific. The market in China is expected to expand at the fastest CAGR during the forecast period due to rise in disposable income and increase in funding for R&D. The contrast media market in Middle East & Africa is projected to expand at a CAGR of 3% to 4% from 2018 to 2026. Investment by major players in the region is anticipated to propel the market.