The global electric traction systems market is highly fragmented. The five leading companies held around 9.5% share in the overall market in 2016. The market seems to be highly competitive, owing to which the firms are working to develop distinct offerings keeping mind the pricing of the components and advancement of electric traction systems. Moreover, the key players are also working on launching customized products, along with long term maintenance facilities in order to grow in the market. Several firms are concentrating on mergers and partnerships to gain access to strategic resources and up profit eventually. 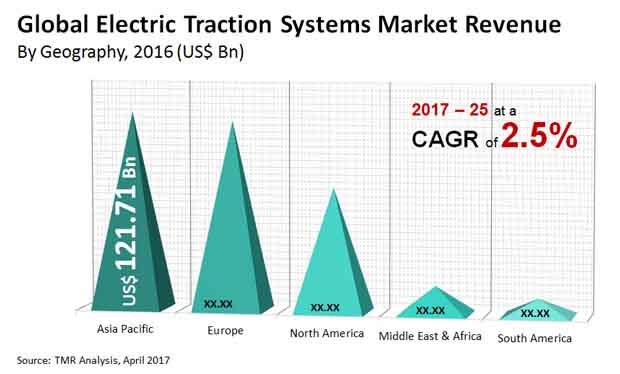 Increased rate of urbanization, modernization of passenger railcars, combined with the tremendous rise in the utilization of electric trains, have been the major factors driving the global market for electric traction systems in past few years. The unfaltering ascent in railway traffic in developing and developed economies is encouraging railroad organizations, government experts, and rolling stock producers to concentrate on modernizing passenger railcars. Besides, the rise in popularity of AC coaches have also supported the demand for electric traction systems, as power utilization of vehicles increase to help ACs.

In addition, the demand for rail-based commute is increasing rapidly because of the rapid surge in the global population and the growing demand for quicker transportation services. This is driving huge change in railroad connectivity and other rail-based transportation systems, which is evaluated to grow further. Rural railroads, for example, trams, metros, and intercity high-speed networks are being planned in various big cities in a many developing economies, which is again anticipated to push the market for electric traction systems in the following couple of years. Besides, ceaseless demand in innovative work has affected the market for electric traction systems.

The electric traction systems market has been segmented as follows: