According to a new market report published by Transparency Market Research, “Automotive VVT system Market - Global Industry Analysis, Size, Share, Growth, Trends, and Forecast, 2018 – 2026” expanding at a CAGR of nearly 4% during the forecast period and is expected to reach US$ 52 Bn by 2026.

The global automotive VVT system market is expected to expand at a CAGR of nearly 4% between 2018 and 2026, according to a new research report by Transparency Market Research (TMR). According to the report, the global market is expected to be influenced by a range of economic, technical, political, social, and industry-specific factors. Latin America is likely to witness an increase in demand for VVT systems, with the market in the region anticipated to expand at a CAGR of 5% during the forecast period. The primary reason for the same is the recent rise in production of passenger and commercial vehicles in counties of Latin America. Latin America is likely to be less hampered by battery electric vehicles, as the adoption of BEVs is not prominent in the region.

Around 28% of the total global emission of greenhouse gas is contributed by the transportation industry. This emission leads to the increase of respiratory disorders among individuals. Global bodies have enacted stringent carbon emission norms on vehicle emission to avoid such cases of deteriorating human health, lower the carbon emitted by vehicles, and enhance IC engine life. VVT systems help vehicles comply with such norms and hence, is expected to propel the overall automotive VVT system market. Development of battery electric vehicles is a cause of rising global carbon footprint, which is expected to hamper the IC engine vehicles market during the forecast period. Thus, it is likely to impact the demand for VVT systems. China 5 and Euro 5 standards are similar in context of the norms to moderate vehicle emission. New vehicles sold through January 2017 were implemented with China 5 standard for gasoline engine, and it is expected to apply to diesel engines since January 2018. China certified real-driving emissions inspection model based on the EU RDE guidelines with a few improvements. The VVT system helps an engine to incorporate such alterations in order to fulfil the norms. 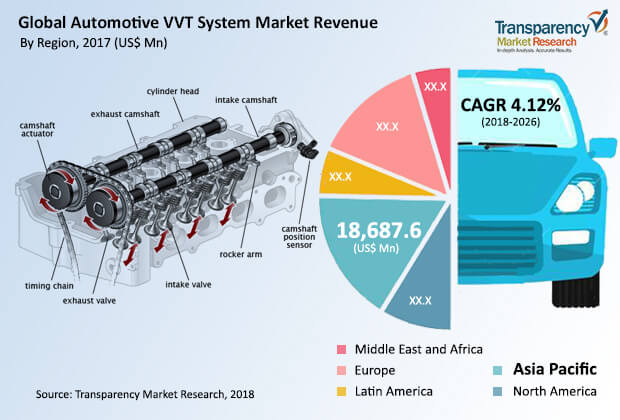 The automotive VVT system market can be segmented based on valve train, fuel type, system, number of valves, valve actuation type, technology, methods, sales channel, vehicle type, and geography. The DOHC valve train system segment is anticipated to lead the market by the end of forecast period. It is expected to expand at a CAGR of 4% and in terms of revenue, the segment is expected to reach US$ 34 Bn by 2026. The gasoline fuel segment held a prominent share, and its market share is estimated to reach 81% of the market by 2026. This is due to the lowered carbon emission from gasoline engine vehicles. The continuous VVT system segment is likely to expand at a rapid pace during the forecast period. In this system, the timing can be enhanced to operate for all engine speeds and conditions. By taking account of number of valves, a 16 valves IC engine is commonly used in vehicles, as it is utilized hatchbacks, sedans, and compact SUVs. Therefore, these vehicle segments dominate the automotive industry. The type II valve actuation segment dominates the market with 44% share. This is due to the presence of type II valve actuation in passenger vehicles. The dual VVT-i technology segment is anticipated to hold a major share of the market and is likely to expand at a CAGR of 4%. VVT-iE technology is electronic valve timing, which uses electrically operated actuators. Cam phasing method as VVT system is widely employed in the automotive industry. Cam-phasing VVT is the simplest, cheapest and most commonly utilized mechanism. Therefore, the cam-phasing method segment holds a significant share of the market. The passenger vehicles segment held 74% share of the global market in 2017. Passenger cars have to comply to stringent emission norms in order to reduce environmental pollution. These factors are responsible for the dominance of the passenger vehicle segment among the vehicle types. Government policies, schemes, and subsidy in numerous countries are boosting the battery electric vehicles segment. Demand for VVT systems in the electric vehicle segment is likely to rise at a sluggish pace, as battery electric vehicles are expected to nullify the usage of VVT systems. The OEM segment leads the market, and was valued at US$ 29 Bn, in terms of revenue, in 2017. The aftermarket segment is likely to retain market share due to the periodic replacement of VVT systems every seven to eight years.

The global automotive VVT system market has been segmented into:

Automotive VVT System Market, by Geography: The market is broadly segmented on the basis of geography into: