According to the report, the global automotive seat belt system market is likely to be driven by a range of macroeconomic and industry-specific factors. Asia Pacific is expected to be at the forefront of global demand, with the market in the region expanding at a CAGR of more than 4% between 2019 and 2027.

Road traffic injury is, presently, among the leading cause of death for children and young adults (aged 5 to 29 years), signaling a need for a shift in the current road safety standards. Motor vehicle crashes, currently, represent the eighth-leading cause of death, globally. According to World Health Organization (WHO), deaths from road traffic crashes have increased to 1.35 million a year. That’s nearly 3,700 people dying on the world’s roads every day. Among them, a majority of drivers and passengers who lose their lives in a motor vehicle crash do not use the seat belt system, which reduces the impact in case of frontal collision and helps avert fatal injuries. Hence, the mandate by governments on the seat belt system is likely to create a positive impact on the seat belt system market during the forecast period. 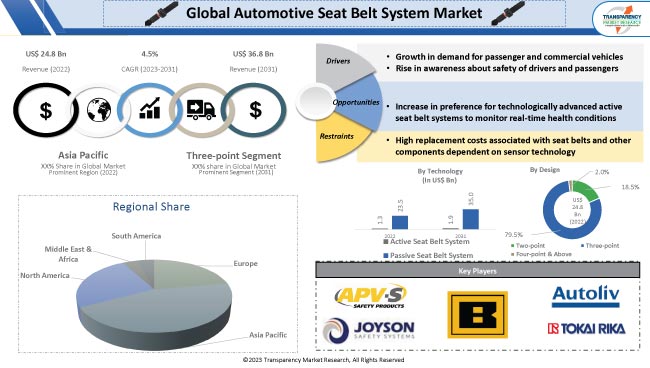 In terms of technology, the global automotive seat belt system market has been divided into active and passive technology. In terms of technology, the passive segment held a major share of the market, owing to its integration in most vehicles. Cost-effectiveness of passive seat belts has been a key factor propelling its integration in most passenger vehicles. The active segment is likely to expand at a significant growth rate during the forecast period, due to rising adoption of active seat belt systems by premium vehicle manufacturers such as Volvo and Mercedes.

Based on seat, the automotive seat belt system market has been divided into rear and front seat. Presence of a large number of rear seats and seat belts, as compared to front seats, resulted in higher market share of the rear segment. Utility vehicles played a major role in boosting the rear segment, owing to the presence of significantly high number of rear seats. Adoption of high technology seat belts, which are more expensive than those incorporated on the rear seats, contributed to the high market share held by the front segment in 2018.

Based on component, the automotive seat belt system market has been classified into retractor, pretensioner, load limiter, buckle, webbing, latch plate, and seat belt pillar loops. Penetration of pretensioners and load limiters is rising in seat belts incorporated in vehicles in order to enhance the safety rating of vehicles, which in turn is expected to boost pretensioner and load limiter segments of the market during the forecast period. Some primary component segments of the seat belt market, such as webbing, buckle, latch plate, and pillar loops are likely to expand at a consistent pace during the forecast period.

The global automotive seat belt system market has been segmented as follows: