Transparency Market Research has published a new report, titled “Asia Pacific Beer Market - Industry Analysis, Size, Share, Growth, Trends and Forecast, 2014 - 2020”. The report provides a comprehensive overview of the beer market in Asia Pacific and investigates the factors that are anticipated to impact the growth of the market. According to the findings of the report, the Asia Pacific beer market will rise from US$155.93 bn in 2013 to US$220.36 bn by 2020 at a positive CAGR of 5.0% during the forecast period between 2014 and 2020.

The report segments the Asia Pacific beer market into premium, economy, and mainstream beer, based on type. In 2013, the mainstream beer segment boasted the largest share in the market at 33%. The success of the mainstream beer is helped to a large extent by established brands who make an effort to improve production in their local manufacturing units to offer quality liquor at affordable prices. Some of the top-selling beers in Asia Pacific are Kirin Ichiban (Japan), OB Blue (South Korea), Tsingtao (China), Yanjing Brewery (China) Asahi Breweries (Japan), and Tsingtao (China).

The premium beer segment, on the other hand, could exhibit a 4.60% CAGR over the forecast period, states the report. The segment of premium beer, according to the report, will exhibit good growth in the forthcoming years, fuelled by rising disposable income and increasing population in the Asia Pacific. India, China, South Korea, Singapore, Australia, Vietnam, and Japan have emerged as the most successful pockets in the Asia Pacific beer market. Among these countries, China was the largest consumer of beer in 2013 owing to its high population and increasing income levels. Furthermore, the demand for beer from countries like India, South Korea, and Singapore is likely to fuel the overall Asia Pacific beer market. 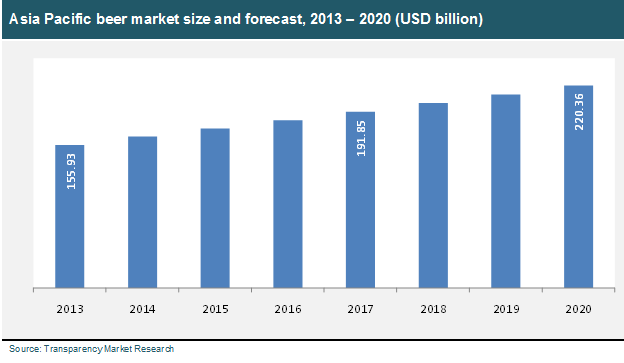 The report defines the Asia Pacific beer market as intensely competitive. The driving seat in the market is held by five key players, who collectively hold 51% of the beer market in Asia Pacific. For the purpose of the study, the report profiles a few notable market players such as Asahi Breweries, Tsingtao Brewery, Anheuser-Busch InBev, San Miguel Brewery, Beijing Yanjing Brewery, Kirin Holdings, and China Resources Enterprise.

The APAC beer market is segmented as below: