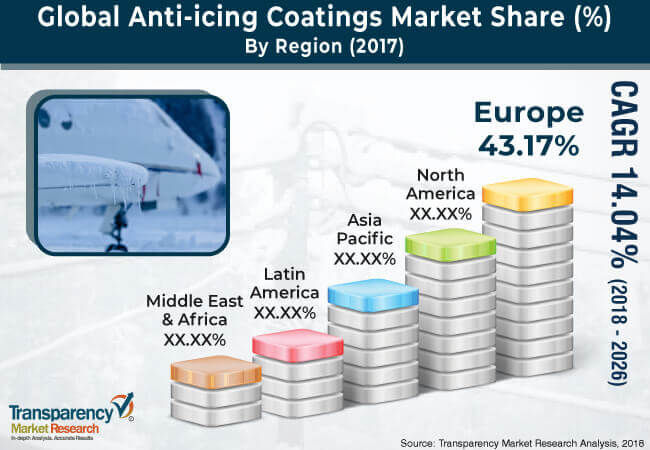 Icing or accumulation of ice caused by freezing of liquid on a surface hampers the functioning of systems. For instance, icing on screens and body of aircraft damages their aerodynamic shape to a large extent. It also increases the load on the aircraft. This boosts fuel consumption and challenges the structural integrity of the aircraft. It can make an aircraft unsafe during severe weather conditions. Icing also occurs in power utilities and telecommunication lines. Ice accumulation leads to added burden on overhead lines and antennas, making them buckle and fail. Therefore, removal of ice is critical for the performance and safety of systems that are exposed to icing. Anti-icing coatings play an important role in curbing costs and safety concerns associated with icing. This is estimated to be a key factor augmenting the anti-icing coatings market during the forecast period.

Lack of Technology to Improve Performance Acting as Restraint

In terms of application, the global anti-icing coatings market has been divided into aerospace & automotive, renewable energy, power utility & telecommunication, construction, and others (including plastics). The aerospace & automotive segment accounted for dominant share of the anti-icing coatings market in 2017. The segment is expected to expand at a rapid pace during the forecast period. The renewable energy segment held large share of the market in 2017. The segment is anticipated to expand at a rapid pace during the forecast period due to the rise in use of anti-icing coatings on wind turbine rotor blades. Anti-icing coatings are widely used on rotor blades of wind turbines. Icing causes safety hazards to rotor blades and leads to forced stoppages of wind power plants. These power downtimes prove uneconomical. Icing also adversely affects the life and mechanical strength of blades. Removal of ice mechanically from rotor blades is not feasible. Anti-icing coatings are more convenient alternatives.