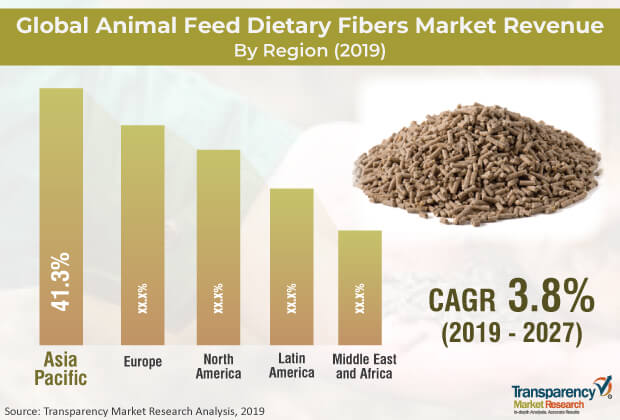 Increase in Demand for Meat to Drive Market

The future of food chain depends on innovative, sustainable, and efficient feed concepts. Global consumption of meat has been rising. According to the United Nations (UN), the global population is estimated to surpass 9.6 billion by 2050. Demand for meat products has been increasing in highly populated countries such as China and India due to the expansion of the middle class. Sustainability of animal diets is crucial in the development of livestock production. Rise in livestock productivity, which is pivotal for meeting the large demand for livestock products, cannot be achieved without the use of sustainable animal diets. Dietary fibers constitute significant portion of animal feed. Dietary fibers are essentially used to improve intestinal health of animals. They are also used for the weight management of animals. Demand for meat is rising by 2% to 3% every year. It is expected to continue to increase by 2050, with more than nine billion people consuming larger amounts of meat. This is estimated to provide significant opportunities for manufacturers of animal feed dietary fibers during the forecast period.

Technological advancements in the animal feed industry are expected to significantly improve the overall efficiency of the production of animal feed dietary fibers. Effective livestock production systems are essential to cater to the demand for animal products in a sustainable manner. Currently, livestock production systems require substantial usage of resources such as energy, land, chemicals, and water – all of these are increasingly becoming scarce. Production of meat is highly water intensive. Large amount of land is required to grow sufficient crops to feed livestock. However, this land could be more efficiently used to meet the increase in food requirements of the expanding global populace. Thus, rise in awareness about environmental concerns associated with meat production is anticipated to adversely affect the demand for animal feed dietary fibers in the near future.

Based on type, the global animal feed dietary fibers market has been divided into corn, cereals, grains, pine, potato, spruce, and others (including vegetables, fruits, and sugar beet pulp). Corn was the leading segment of the market in 2018. This trend is projected to continue during the forecast period. The corn segment is projected to hold the largest share above 40% of global animal feed dietary fibers market by 2027. Corn provides adequate amounts of dietary fibers to animals. It also promotes rumen bacterial growth, thus enhancing the feed digestibility.

Based on application, the global animal feed dietary fibers market has been segmented into pet food, compound feed, and specialty feed. The compound feed segment is anticipated to dominate the market from 2019 to 2027. Ruminants are herbivores; their diets are composed of plant materials. Compound feed helps ensure livestock health and minimize distress among animals.

The global animal feed dietary fibers market has been segmented as follows:

TMR’s data repository is continuously updated and revised by a team of research experts so that it always reflects the latest trends and information. With extensive research and analysis capabilities, TMR employs rigorous primary and secondary research techniques to develop distinctive data sets and research material for business reports.