According to a new market report published by Transparency Market Research titled “Ammunition Market – Global Industry Analysis, Size, Share, Growth, Trends, and Forecast, 2018 – 2026,” the global ammunition market is expected to reach US$ 16,468.2 Mn by 2026. The market is projected to expand at a CAGR of 3.5% during the forecast period from 2018 to 2026. According to the report, the increase in defense expenditure by emerging economies such as China, India, and Japan is expected to be the primary growth driver for the ammunition market. Asia Pacific is projected to be at the forefront of global demand, with the market in the region growing at a CAGR of 5% through 2026. 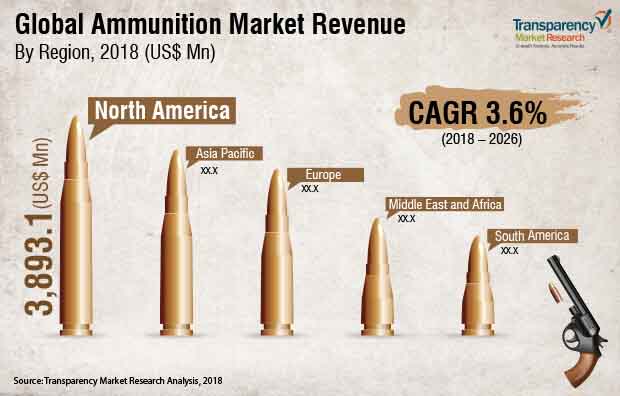 In terms of application, the ammunition market is segmented into commercial, military, and law enforcement. The military segment is expected to be the major revenue generating segment by 2026. This growth can be attributed to the increased defense spending by governments of various regions and the need to improve the versatility, agility, and capability of the armed forces. The military segment is expected to expand at a modest CAGR of 3.8% over the forecast period.

China is expected to be at the forefront of ammunition demand among all the Asia Pacific countries. India, South Korea, and Japan are also expected to contribute significantly to the Asia Pacific ammunition market. Companhia Brasileira de Cartuchos, BAE Systems, Fiocchi Munizioni, General Dynamics Corporation, Hornady Manufacturing Company, Inc., Nammo A.S., Nexter Group, Orbital ATK, Inc., Prvi Partizan A.D., Rheinmetall AG, and RUAG Group among others are some of the key players operating in the ammunition market profiled in this study. Details such as financials, business strategies, recent developments, product implementation expertise, key contracts, certified professionals, and other such strategic information pertaining to these players have been duly provided as part of company profiling.

The global ammunition market is segmented as follows: