Polymer Dispersion Market to Evolve with Advent of Nano-dispersion Technology

Though the global polymer dispersion market has reached a mature and stable stage, it is undergoing major transitions with the emergence of technological innovations, which are triggered by the growing need for environment-friendly polymer applications.

The global polymer dispersion market is currently valued at ~US$ 7.6 billion, and is anticipated to experience double digit growth by 2027, to reach a value of ~US$ 11.8 billion. Ongoing developments in the polymer dispersion landscape are giving rise to newer applications for sealers and primers with the help of nano-dispersion technology. Likewise, stakeholders are using this technology to its full potential to provide their clients and end users with high-efficiency sealants and adhesion improved penetration primers devised with nano emulsions.

Owing to the rising demand for high-performance adhesives and sealants in various industrial applications, nano-emulsions offer several advantages as compared to conventional emulsions. However, the issue of durability and shelf-life of surfaces and structures may slow down the demand for nano-emulsions. Although nano-emulsions might have a few drawbacks, various studies and experiments show that, the water repellency attribute of nano-emulsions, prevention of ruptures, and moisture migration are creating demand for suitable applications on other substrates such as wood, concrete, tiles, and plaster to leverage product performance when used with additives. 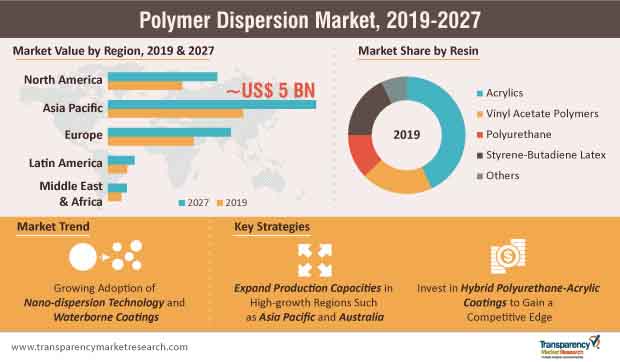 The demand for polymers began from the mid-20th century with the introduction of plastics in the polymer dispersion market, and has evolved as a profitable industry with numerous applications in resin-based acrylics, paints, coatings and printing inks. With new opportunities coming to the fore in the polyurethane industry, stakeholders in the polymer dispersion market are likely to focus on adopting novel techniques such as crosslinking polyurethane dispersions for highly-efficacious wood coatings.

Polyurethane dispersions (PUDs) create a unique film formation, which provides customers with a distinguished appearance for wooden structures and high-resistance properties. However, though polyurethane coatings have several advantages, the usage of PUDs is sometimes limited due to their high costs as compared to acrylic emulsions. Eventually, this challenge could hamper the demand for polyurethane coatings in the polymer dispersion landscape.

Since acrylics account for ~43% revenue share of the polymer dispersion market, manufacturers are opting to crosslink PUDs with acrylic through a chemical reaction or physical blend, which results in a PUD-acrylic hybrid, in order to equalize the high costs of polyurethane coatings. This PUD-acrylic hybrid acts as a highly-efficient wood coating that improves the crosslink density of the film coating, thus adding up to the consumer value for wooden furniture.

As governments are encouraging the manufacturing of environmentally-friendly materials, stakeholders in the polymer dispersion market are increasing research & development capacities to meet stringent government regulations. These research experiments are being used to produce materials based on renewable raw materials.

Influenced by the exponential revenue growth of bio-based paints and coatings in the polymer dispersion landscape in the U.S and Europe, manufacturers are now turning towards the production of bio-based interior paints and plasters. For instance, in February 2019, Wacker Chemie AG ? one of the leading chemicals company in the landscape of polymer dispersions, announced the launch of hybrid polymeric binders that are produced using vinyl acetate-ethylene polymers and starch for industrial applications. As vinyl acetate polymers account for ~one-third of the polymer dispersion market share, Wacker Chemie AG became one of the first companies in the world to manufacture bio-based hybrid polymeric binders used as additive in paints and plasters for lasting adhesion and an eco-friendly alternative for polymers made with fossil resources such as petroleum and natural gas.

Apart from paints, coatings, adhesives and sealants, stakeholders in the polymer dispersion market are also expanding their product offerings for a wide spectrum of oilfield applications. Manufacturers are increasing efforts in research & development to produce bio-polymer additives. Likewise, AkzoNobel ? one of the largest global paints and coatings companies in the polymer dispersion landscape, announced the launch of several product offerings for the oilfield industry, through its business unit Surface Chemistry. These products include a range of natural and synthetic materials that are used to produce iron-linked pseudo-polymer complexes that serve as effective crude oil extractors.

Besides increased research and developments, stakeholders are advancing on transforming business operations to provide consumers and end users with efficacious printing inks for various industrial purposes, since printing inks account for ~two-thirds of the polymer dispersion market. Recently, a study was conducted on the effect of different surfactant monomers on water-soluble emulsion polymers as a binder for water-based printing inks. Results concluded that, synthesized di maleate surfomer ? a type of surfactant monomer, enhances the color strength of the printing ink, but slightly affects its viscosity. 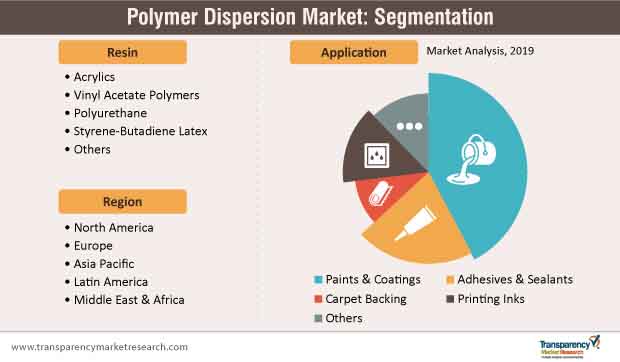 Is something restraining your company’s growth in the “Polymer Dispersion Market"? Ask for the report brochure here

The global polymer dispersion market is prone to stringent environment regulations, and governments across countries are appealing for greener and sustainable materials and polymers. This appeal from governments has given rise to various innovations, and waterborne coatings is one such innovation, with the help of which, stakeholders are maximizing their businesses. The high-water content in waterborne coatings makes them environment-friendly, and easy to apply on various structures and surfaces. Also, their attribute for several applications in furniture, automobiles, plastics and printing inks makes them a highly-appreciated choice for consumers and end users.

Owing to the major market share of acrylics in the polymer dispersion landscape, manufacturers are expanding production capacities in some high-growth potential regions such as Asia Pacific. Manufacturers are devising business strategies by increasing investments that would double the production capacities and facilitate the demand from major end-user industries such as construction, adhesives, and coatings. For instance, in October 2018, BASF SE ? a German leader and one of the largest chemical producers in the polymer dispersion market, announced the expansion of its production capacity for acrylic dispersions in Malaysia. Through this expansion, the company plans to offer a reliable supply of high-efficacy dispersions solutions to clients and end users in fast-growing ASEAN (Association of Southeast Nations) countries, New Zealand, and Australia.

Stuck in a neck-to-neck competition with other brands? Request a custom report on competition on “Polymer Dispersion Market” here

Analysts of the polymer dispersion market offer a 3600 overview of the strategic opportunities and challenges that stakeholders might face during the projection period of 2019-2027. The polymer dispersion landscape provides a favorable go-ahead for stakeholders that are planning to invest in some of the most fastest-growing markets, such as Asia Pacific, Europe, and North America.

The polymer dispersion market has a wide scope for technological innovations and incremental opportunities. However, stringent environmental regulations from governments for greener and sustainable polymer dispersions are creating pressure on stakeholders to increase research & development activities. With the help of eco-friendly product offerings, such as waterborne coatings and bio-based polymers, stakeholders could be empowered to provide added product value to consumers and other end users.

This report by TMR offers accurate data and analytics based on extensive data gathered on the development and growth of the polymer dispersion market around the world. The report also answers very important questions about the polymer dispersion market, which can help stakeholders and major players in making key strategies to stay ahead in the business. These questions include:

The report begins with a preface that includes the scope, market segmentation, and research highlights of the polymer dispersion market, followed by an executive summary as well. This is followed by a comprehensive segmentation analysis of the polymer dispersion market, and an analysis of the growth forecast and geographical outlook.

The third step is market sizing and forecasting, which includes market estimation, forecasting, and the value addition of the market. The fourth step is data validation and feedback, which is essentially the primary source for research and response analysis. The last step is the launch of the report.

The polymer dispersion market, according to this study by TMR, is divided into three segments - resin, application, and region. The trends, drivers, and impact of these factors are also discussed in this report, on the landscape as a whole, and by each segment.