Plastic is one of the highly functional, esthetic, and sustainable materials. It has replaced materials such as metal, concrete, and wood, as it is light in weight, corrosion proof, economical, and esthetically appealing. Manufacture of plastic also entails less energy. Global production of plastic stood at 322 million tons in 2015 and is estimated to increase at a CAGR of 6% to 7% by 2020. Plastics are bad conductors of electricity. Therefore, they are used in applications that require insulating properties. For instance, PVC is commonly used in wires and cables, while thermosets such as PU and PE are used in handles, switches, etc. Plastics is employed in outer body packaging of household appliances (toaster, blender, mixer, etc.) and personal care appliances (hair dryers, electrical razors, etc.). 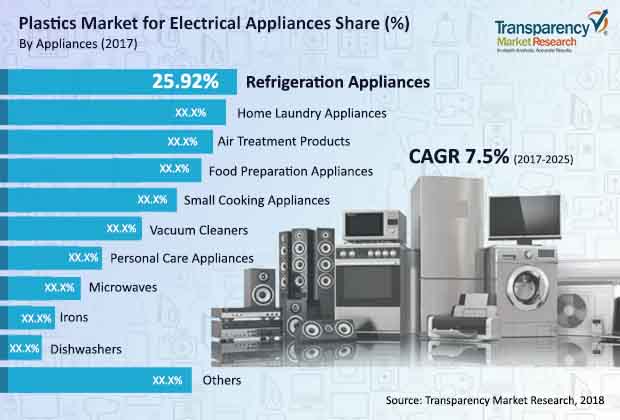 Air treatment products is one of the fast growing appliance segments of the market. Rise in demand for air treatment products such as air conditioners, especially split air conditioners, air purifiers, and fans is the key factor driving the segment. However, in terms of consumption, refrigeration appliances was the dominant segment of the market in 2016. The segment consumed substantial quanta of total plastic in 2016 and is anticipated to expand nearly twice by 2025. A typical refrigerator consists of several plastic components such as liners, trays, handles, holders, and stands. Thus, demand for plastic is high in the segment.

Demand for electrical appliances has been rising since the last two years. It is impacted by several factors such as availability of products, trends in an individual appliance segment, product development, per capita expenditure, disposable income, and economic factors. Increase in production of electrical appliances is expected to further boost the demand for plastics in the near future. Mass production of electrical appliances with plastic components also provides economic advantages while maintaining optimum functionality. Styrenic polymers, in particular, exhibit a wide range of properties through different products such as polystyrene, ABS, SAN, and block copolymers. The shift in usage from traditional materials to plastics has also propelled the plastics market. Unlike metals or organic materials, plastics are corrosion resistant. With the help of additives, they can also be made chemical- and acid-resistant. Furthermore, the need to produce lightweight appliances, while maintaining high performance, reliability, durability, and dimensional stability is met with the help of plastics. Different colors, textures, and properties such as transparency and opacity can be achieved with the use of colored additives or by blending two or more polymers. These factors work in tandem and propel the demand for plastics for electrical appliances.

Plastics are a versatile material that pose as cost-effective manufacturing materials for several industries. Plastics used in electrical and electronic devices are characterized by being flame-retardant, lightweight, electrical insulation properties, and melt stability. Additionally, suppliers in the plastics market for electrical appliances provide copolymers for manufacturing electrical devices which have high machinability, such as plastics that are compatible with high-temperature circuit assembly methods. The plastics market for electrical appliances has made remarkable strides on the back of the rise in demand for electrical home appliances in numerous developing and developed nations. Chemical companies and resin manufacturers are leaning on research and development activities with the objective of unveiling polymers and resins with attractive dimensional stability. Electronic device manufacturers have also been reaping benefits that newly developed plastics promise, notably excellent creep and fatigue resistance. Designers have gained access to polymers and resins that allow them to exercise freedom in developing a wide variety of electronics components.

Advances in the chemistries of polymers are the key pivot on which new product developments emerge in the plastics market for electrical appliances. Over the past few months, companies, however, have faced supply chain disruptions due to COVID-19-led lockdowns. The pandemic has also adversely affected the retail shopping trends in various countries across the globe. Hence, players in the plastics market for electrical appliances are keen on adopting strategies that help them remain agile in the post-COVID world. One of the prominent trends that might attract demand is the recyclability quotient of plastics. Some of the large electrical companies have begun strengthening their plastic recycling infrastructure. Moreover, a few electrical manufacturers have come with new technologies that enable them to sort out different polymers from the discarded electrical appliances and finally recycle these. Such initiatives allow them to recycle more than half of the plastics contained in these appliances. Key polymers recycled include polypropylene (PP), acrylonitrile-butadiene-styrene (ABS), and polystyrene (PS).

Plastic is one of the highly functional, esthetic, and sustainable materials. It has replaced materials such as metal, concrete, and wood, as it is light in weight, corrosion proof, economical, and esthetically appealing. Manufacture of plastic also entails less energy. Global production of plastic stood at 322 million tons in 2015 and is estimated to increase at a CAGR of 6% to 7% by 2020. Plastics are bad conductors of electricity. Therefore, they are used in applications that require insulating properties. For instance, PVC is commonly used in wires and cables, while thermosets such as PU and PE are used in handles, switches, etc. Plastics is employed in outer body packaging of household appliances (toaster, blender, mixer, etc.) and personal care appliances (hair dryers, electrical razors, etc.).

Plastic plays a vital role in reduction of weight of appliances. Plastics offer freedom of design in terms of product differentiation. They also save time in processes such as welding of parts or assembly of components. Usage of plastics also lowers the cost of post-machining processes such as painting, which can be achieved by mixing color additives in polymer resin composition. Plastics can be molded as per the product requirement prior to their fitting in the assembly as well. Electrical insulation, heat insulation, lightness of weight, freedom of design, and durability are some of the qualities of plastics that boost its usage in the manufacture of electrical appliances.

The global plastics market for electrical appliances is dominated by few major manufacturers, while the remaining share is highly fragmented. Several resins are used in the manufacture of electrical appliance components. Market leaders for each resin are different as raw materials, technology, and grades required for each resin vary significantly. Ineos Styrolution Group GmbH is the market leader in polystyrene, while Covestro dominates the market in terms of polycarbonate. Several manufacturers offer a wide variety of resins in various grades for various applications. Thus, the overall effect is stiff competition in the plastics market. Companies primarily focus on the marketing strategy of products in order to enhance their market share. Furthermore, manufacturers increase their sales force by expanding and strengthening their distribution networks. Existing companies as well as new entrants also focus on competitive pricing, since players operating in the market such as LG Chem, INEOS, BASF SE, ExxonMobil Corporation have integrated operations. Manufacturers focus on producing resins with exceptional properties to meet the high demand in electrical appliances (for instance, ABS, PS, and PP).

The report comprises detailed value chain analysis, which provides a comprehensive view of the global plastics market for electrical appliances. Porter’s Five Forces model for the plastics market has also been included to help understand the competitive landscape. The study encompasses market attractiveness analysis, wherein end-users are benchmarked based on their market size, growth rate, and general attractiveness.

The study provides a decisive view of the global plastics market by segmenting it based on resin, appliances, and region. These segments have been analyzed based on the present and future trends. Regional segmentation includes the current and forecast demand for plastics for electrical appliances in North America, Latin America, Europe, Asia Pacific, and Middle East & Africa. The report also covers the demand for individual end-user industry segments in all the regions.

The report provides the estimated market size of plastics for 2016 and forecast for the next nine years. The global size of the plastics market has been provided in terms of volume and revenue. Market numbers have been estimated based on resin, appliance, and region. Market size and forecast for each product and end-user industry have been provided in terms of global and regional markets.