Organic acid is a type of organic compound that typically has acidic properties. Organic acids are known as weak acids, as they do not disassociate in water completely. For instance, carboxyl acid is a common example of organic acid. Commonly used organic acids are acetic acid, lactic acid, and citric acid. Organic acids are used in a wide range of applications such as bakery, dairy, livestock feed, beverages, and pharmaceuticals. They are either produced naturally or synthetically. They are produced naturally through the fermentation process by several microorganisms. They are synthetically produced on a wide scale for commercial applications such as catalysts, dyes, surfactants, and others.

Organic acids are widely used for regulating the acidic content of foods and also to enhance flavor. The antioxidant and preservative properties of the compounds makes them highly preferred in the food manufacturing industry, thereby boosting the organic acids market. A rise in the global population and GDP growth in developing economies are anticipated to drive demand for organic acids during the forecast period. Furthermore, demand for organic acids is also likely to be high from the pharmaceutical sector, due to their use in various drugs such as phenacetin and aspirin. 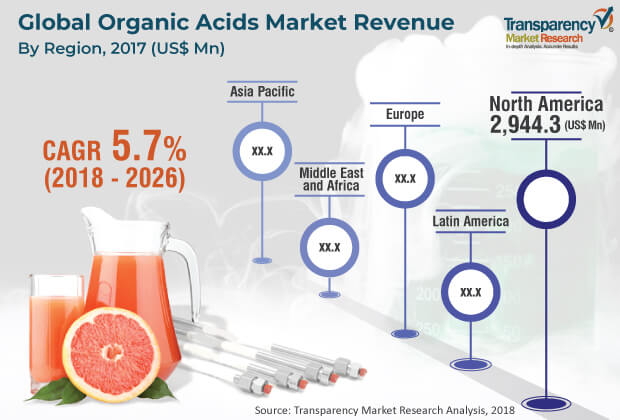 The global organic acids market has been segmented based on product type, application, and region. In terms of product type, the market has been divided into acetic acids, citric acids, formic acids, propionic acids, lactic acids, fumaric acids, ascorbic acids, gluconic acids, and others (butyric acid, uric acid, oxalic acid, tartaric acid, etc.). Acetic acid was a dominant segment of the global market in 2017. In terms of application, the global organic acids market has been classified into bakery & confectionery, dairy, beverages, poultry, meat, and seafood, livestock feed, animal feed, pharmaceuticals, industrial, and others (packaging, cosmetics, textile, etc.). Bakery & confectionery was a leading segment of the market, accounting for about 25% of the market share in 2017. Organic acids are frequently used to ensure both product palatability and preservation in the beverage industry. Moreover, an increase in demand for flavoring agents in the food industry is driving the market. Organic acids are also widely consumed in animal and livestock feed, owing to their decreased pH values and as preservatives. Thus, demand from the animal feed and livestock feed segments is expected to drive the organic acids market during the forecast period.

The report comprises a detailed value chain analysis, which provides a comprehensive view of the global organic acids market. The Porter’s Five Forces model has also been included to help understand the competition landscape of the market. The study encompasses market attractiveness analysis, wherein product type and application segments have been benchmarked based on their market size, growth rate, and general attractiveness.

The report provides size (in terms of volume and value) of the organic acids market for the base year 2017 and the forecast for the period between 2018 and 2026. Market numbers have been estimated based on product type and application segments of the market. Market size and forecast for each product and application segment have been provided for the global and regional markets.