Off-grid solar lighting products are rapidly becoming the primary mode of illuminating remote areas in developing and under-developed countries where grid infrastructure is either non-existent or is highly unreliable and incompetent. Nearly 18% of the world’s population had no access to electricity as of 2013, making the demographic directly dependent on solid fuels such as coal and wood and liquid fuels such as kerosene for lighting purposes.

Of these, kerosene takes a major share and is estimated to account for nearly US$30 bn in expenses directly incurred by millions of households across the globe every year for lighting purposes only. Off-grid solar lighting products are efficient contenders to this supposedly cleaner fuel (as compared to solid fuels such as wood and coal) and are gaining increased attention from governments and consumers alike.

TMR projects that by completely replacing kerosene with off-grid solar power products, the annual costs on lighting incurred by the world’s off-grid population can be brought down by 10% to 15%. Savings of this level can have a major impact on the overall development of developing economies. Environmental benefits of switching to a cleaner energy source such as solar power are also vast.

Owing to these factors, governments are focusing on raising consumer awareness about the increased use of off-grid solar lighting techniques and promoting the development of more efficient products by initiating funds and tax-abatements for vendors. The rising prices of kerosene, 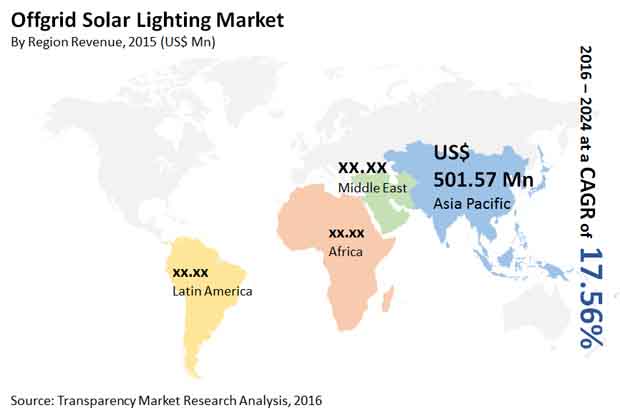 Poor grid infrastructure in several African countries has led to major growth opportunities for the off-grid solar lighting market in the region in the past years. With rising intervention of government and increased awareness among consumers, Africa is expected to emerge as a highly lucrative regional market for off-grid solar lighting products in future years as well. Nevertheless, Asia Pacific will emerge as the leading regional market owing to favorable regulatory platform and provision of direct subsidies for solar lantern systems for household usage. Asia Pacific will account for the largest 50.51% share, Africa will account for the second largest share at 46.63% in the global off-grid solar lighting market by 2024.

The rising consumer base of mobile devices such as smartphones and tablets in Asia Pacific will also boost the consumption of innovative off-grid solar power products capable of charging these products. The unreliable grid infrastructure, frequent power cuts, and complete unavailability of grid in certain remote locations of Asia Pacific will prompt mobile users to go for the cost-efficient and reliable off grid solar products.

In India, which is one of the most lucrative markets for off-grid solar lighting systems with around 260 million households directly dependent on off-grid lighting options, government bodies are taking active measures to increase the adoption of solar lighting systems in remote parts of the country. The Ministry of New and Renewable Energy (MNRE) in India plays a major role in launching public missions such as The Jawaharlal Nehru National Solar Mission (JNNSM), which aims at increasing the adoption of solar home systems in the country to 15 mn by 2022. Meanwhile, Latin America will have a meagre 1.64% share in the global off-grid solar lighting market by 2024 owing to low consumer awareness about the innovative and cleaner solar lighting products.

The off-grid solar lighting market has been segmented as follows: