There are numerous brands operating in the region, wherein a large number of them are into multiple segments while some confining to a particular segment. Some of the major players includes Adidas AG, Nike Inc, Skechers U.S.A., Inc., and The Aldo Group Inc. among others. 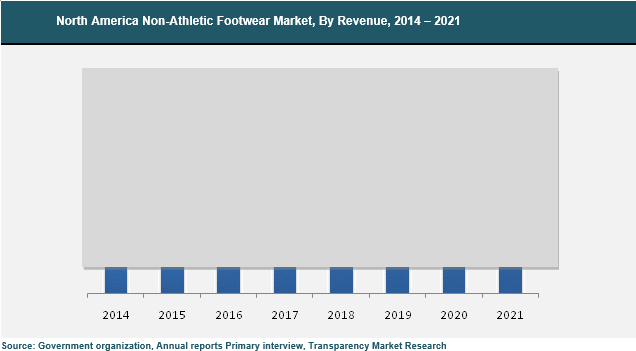 North America footwear market is expected to undergo several changes such as new variations being added along with the introduction of new styles. Recent trends have shown, there is an increasing concern among people for eco fashion. Ethical footwear and recycled footwear is mainly driving this market. In addition, growing fashion consciousness among consumers towards footwear products and increasing purchasing power of youth population are expected to boost the demand for footwear in the major countries of North America including the U.S., Canada and Mexico among others during the forecast period.

The report also provides an understanding of volume (unit million) and value (USD million) of the North America footwear market. The study also provides forecast from 2015-2021 and highlights current and future market trends. Additionally, the report also focuses on the drivers, restraints and opportunities impacting the North America footwear market.

By country, the market has been segmented into the U.S., Canada, Mexico and others. Mexico is expected to witness fastest growth in the North America footwear market during the forecast period. Technological innovations in footwear, and increasing online sales are driving the footwear market. In addition, change in lifestyle and rapid expansion of shopping centers is also expected to increase the demand for footwear in Mexico.