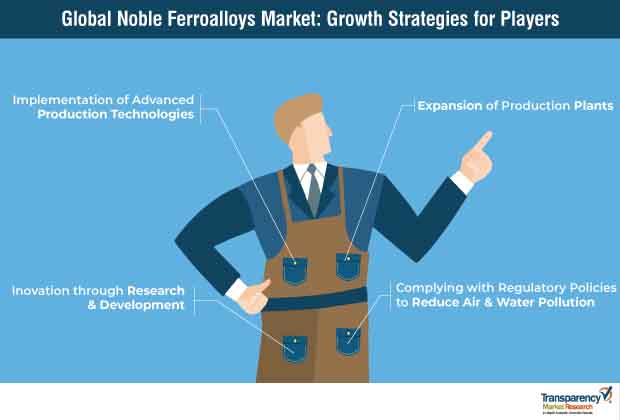 U.S.-China Trade War has Induced Uncertainty in the Ferroalloys Industry

The growth and decline of the global ferroalloys market is directly linked with the ups and downs taking place in the global steel market. As China is a dominating global steel producer, holding ~ 51% share of the world’s crude steel production, it largely influences the growth of the global noble ferroalloys market. Things changed when recently, China and the U.S. became locked in an ugly trade war. In addition to this, uncertainties regarding the trade environment, rising interest rates, and complacent financial markets have also adversely impacted the growth of the steel market. Attributing to these global scenarios, the demand for steel dipped in 2016-2017. However, the global steel market regained its pace, but at a moderate growth rate in the following years.

With current instability in the steel industry, fluctuations are expected to come as impediments in the growth of the noble ferroalloys space. In 2018, the global noble ferroalloys market was valued at ~ US$ 32 billion, and the market is projected to reach ~ US$ 68 billion by the end of 2027.

China is the largest producer of steel, and in 2018, it produced ~ 928 million tons (MT) of steel, up from ~ 870 MT in 2017, an increase of 6.6 percent. In early 2018, the Chinese steel industry took a hit due to huge tariffs imposed by the U.S. on Chinese goods. The situation turned into a trade war between these two giant economies. This eventually affected the growth of the global noble ferroalloys market too. It also had a ripple effect on other countries closely connected to China’s supply chain for steel, such as India, Japan, Korea, and others.  As a counter, the Chinese government also imposed certain import tariffs on U.S. goods. This is an ongoing situation and its outcome is likely to affect the noble ferroalloys market in one way or another. As per TMR analysis, the steel industry in China is expected to grow in the coming years, due to increasing infrastructural developments and the expanding construction industry in the Asia Pacific region.

Is something restraining your company’s growth in the Noble Ferroalloys Market? Ask for the report brochure here

Bright Future for the Ferroalloys Market in India

India has overtaken Japan as far as steel production is concerned, and now stands second, globally. In 2018, India’s crude steel production shot up by 4.9%, reaching 106 MT from 101 MT in 2017. Growth in steel production has significantly benefited the noble ferroalloys market. Noble ferroalloy producers are innovating and introducing new technologies in processing and plant equipment designs. With increasing infrastructural development in India, the noble ferroalloys market is expected to have a bright future in India in the near future. Although, there are chances that the market in India might be adversely affected due to cheaper imports from China.

Companies manufacturing noble ferroalloys in India are expected to witness high growth due to increasing infrastructural development and construction. According to international reports, India is expected to rise at an annual GDP growth rate of 7.5 percent in 2019. Despite the global slowdown for steel, Indian demand has shown resilience. Infrastructure development is the key growth driver, as the Indian infrastructure sector witnessed 91 mergers and acquisition deals worth US$ 5.4 billion in 2017. The development of smart cities and increasing urbanization has further attracted investments from companies across the globe. With ~ 50% of steel consumed for infrastructure development, this sector opens huge opportunities for the global noble ferroalloys market.

In 2017, U.S. steel demand grew substantially due to strong consumer spending and business investment, supported by tax and regulatory changes. But growth in the construction sector was moderate. The overall production of steel in the U.S. was ~ 95 million tons in 2018. Steel demand growth during 2019-2020 is expected to slow down, attributing to modest growth in auto manufacturing and construction activity in the country. However, the manufacturing sector is expected to perform well based on the growing strength of the machinery and equipment sector. 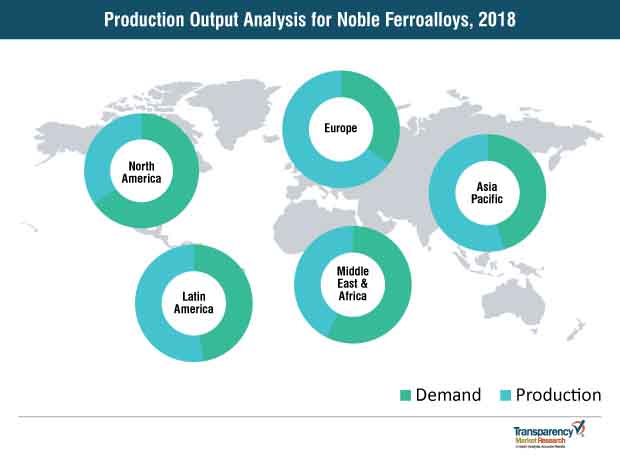 Stuck in a neck-to-neck competition with other brands? Request a custom report on competition on Noble Ferroalloys Market here

Noble ferroalloy manufacturers are focusing on using new technologies and innovations to design plant equipment, process technology, and product mix. Their main objective is to improve the overall efficiency and cost-effectiveness of ferroalloy production plants. For instance, SMS Siemag AG has developed a new technology for ferroalloy production, by using the vacuum technique and the converter technology, which is anticipated to reduce thermal loss, lessen operating costs, and reduce nitrogen and hydrogen content in steel alloy compositions.

Growing Use of Ferroniobium in the Automotive Sector

The use of ferroniobium has been increasing considerably in the automobile sector. Ferroniobium helps produce lighter structures without compromising on their strength. Ferroniobium can also be employed in the production of lighter cars that run on lower amounts of fuel. In North America, Canada is a prominent producer of ferroniobium. This is majorly used for the production of high-strength, low-alloy (HSLA) steel, which is used in automotive, construction, and pipeline industries. As per the technology used by AMG Advanced Metallurgical Group N.V., ferroniobium is produced by the aluminothermic reduction of niobium oxide. This procedure helps in improving the wear, heat, and corrosion resistance in superalloys.

Countries such as India and China are production hubs for noble ferroalloys. Noble ferroalloys are crucial components that are required for the manufacturing of stainless steel, foundry, steel making, welding rods, wire products, and others. Among the various noble ferroalloys, the demand for ferronickel is the highest. In 2018, the export value of ferronickel crossed the US$ 5 billion mark, which is likely to increase in the coming years. China, India, Russia & CIS (Commonwealth of Independent States), and Kazakhstan are the major producers of noble ferroalloys. These countries have ~ 70% of the world’s noble ferroalloys production capacity. But strict EPA regulations in China, along with price fluctuations in the stainless steel market in the country, results in an unstable import-export trade scenario.

The presence of a large number of producers of noble ferroalloys has created a highly fragmented market structure. A large number of leading players are concentrated in the Asia Pacific region. Companies engaged in the production of noble ferroalloys are specialized in single noble ferroalloys, among all the noble ferroalloys. Leading players in the global noble ferroalloys market are engaged in mergers and acquisitions, expansion, collaborations, and innovation. For instance, AMG Advanced Metallurgical Group N.V. recently started two new strategic operating divisions: AMG Technologies and AMG Critical Materials. Among the seven operating units, AMG Vanadium is the largest producer of ferrovanadium in North America; it has its own proprietary technology based on the pyrometallurgical process. Recently, the company announced that AMG Vanadium LLC entered into an agreement to supply 7 million pounds of vanadium to a U.S.-based steel producer for the next two years, starting from January 2019.

Other prominent players in the global noble ferroalloys market are also focusing on research and development activities to develop new and customized products. They are also engaged in delivering support services to their customers. Moreover, national and international ferroalloy conferences are also benefiting producers in expanding their presence and establishing relationships with other industry players. 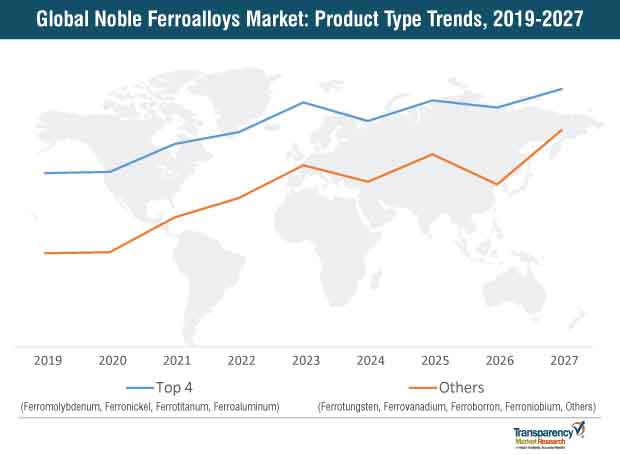 Analysts have a positive outlook for the global noble ferroalloys market, as steel is extensively used in construction and infrastructural development. Analysts believe that, the U.S.-China trade war will have an adverse effect on market growth, which, if addressed, would help the market grow faster. Players in Asia Pacific are enjoying a certain level of dominance in the noble ferroalloys market, due to the high availability of raw materials in the region. Prominent players in the market are willing to invest in research and development with the objective of providing better and enhanced products and services. New entrants need to connect with big industry players, mainly through national/international conferences, besides others means, as this will help them in creating a robust brand image and presence in the market. They also need to focus on developing new technologies, just as a few leading companies are already doing, as this will help them gain an edge in the production of noble ferroalloys.

Ferronickel Accounted for a Prominent Share of the Noble Ferroalloy Market

Asia Pacific Expected to be a Highly Lucrative Market

A majority of companies are located in Asia Pacific. Key players that operate in the noble ferroalloys market include

Transparency Market Research has recently published its new report on the global noble ferroalloys market. The report provides detailed analysis of the growth of the noble ferroalloys market, and its impact on the manufacturers and players across the globe. Researchers have compared historical data along with the ongoing trends to understand the market’s growth till the end of 2027. While analyzing a few crucial areas, historical data for base year of 2018 was taken into consideration.

Researchers also elucidated on various macroeconomic and microeconomic factors. Overall, the report consists of systematic analysis along with graphical representation to give out a complete picture on the global noble ferroalloys market.

Moreover, researchers have also emphasized on the drivers, trends, opportunities, and threats (DROTs) to develop insights by following a holistic approach. These insights will help noble ferroalloy stakeholders take better decisions while expanding their businesses and to strengthen their position in the global market. Competitive analysis with respect to their market standing, revenue generation, and involvement in research and development are also presented in the report. Prominent players analyzed in the report include

Geographical reach and understating on various markets with regards to the growth of the noble ferroalloys market is explained in detail in this report. Key regions included in the report are