Montana wax market thrives on the wide array of applications in wax polish, cosmetics, chemical, machinery, electrical, and numerous other industries. Economies striving for leveraging the high commercial value of montan wax are leaning on relentlessly adopting advanced extraction technologies. These pertain to pretreatment of raw materials in order to vary resin content to meet the desired end-use industries’ requirements. Producers in the montan wax market are keen on attaining the objective of making production process cost effective in order to broaden the application base. Rise in demand for producing high-quality synthetic wax is a key driver for rise in industry investments in the market. In the wake of still-emerging Covid-19 pandemic and its impact on manufacturing sectors, the supply chain strategies of various producers of montan wax have undergone realignment. Chemical companies in the montan wax market have in recent months adopted raw materials sourcing strategies with the aim of achieving resiliency and keep the growth momentum intact against the Covid-19 disruptions.

The outlook of the montan wax market is expected to shine in coming months, fueled by rising demand for technical wax applications in the paints and coatings and cosmetics industries. Producers in key regional markets are testing environmental-friendly extraction technology. The aim is to attain an optimal percentage of wax content that is extracted. An example of such a technology is solid-liquid extraction. Countries who had sizable shares in the production of montan wax have been continuously expanding research and development. Future research directions aim at studying the pharmacological effects of montan wax, which might spur its prospect in the medical industry. Producers aiming to develop montan wax for meeting the needs of cosmetics industry have already achieved products with good toxicity profile. Also, it is commercially important to explore application of montan wax resin to make the entire process economically profitable for market players.

Montan wax is a hard mineral wax obtained from lignite and peat. It was first produced in northern Bohemia (the Czech Republic) in the late 1800s. The crude wax obtained is dark brown; however, the wax turns light yellow to white in color after purification with solvent extraction. Montan wax has been used as a substitute for carnauba wax and beeswax. It is hard and brittle and has high melting point. Montan wax is also known as lignite wax or OP wax. Commercially viable deposits exist in a few locations. These include Amsdorf, Germany, and the Ione Basin, California. Montan wax is available as crude wax or refined wax. Refined wax is also called bleached wax. 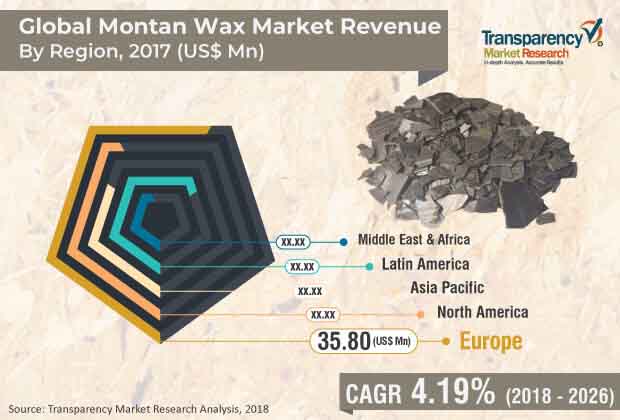 The global montan wax market is anticipated to expand at a significant pace during the forecast period primarily due to the rise in demand for wax polishes in automotive and furniture industries. The montan wax market was valued at US$ 118 thousand in 2017 and is expected to expand at a CAGR of more than 4.0% during the forecast period. Increase in demand for fruit wax is boosting the demand for montan wax. Demand for montan wax in is high, as it provides edible coatings and films for fruits. The wax coating helps improve the shelf-life and the quality of fruits and vegetables.

Key players operating in the global montan wax market need to focus on promoting benefits of montan wax. Major players are engaged in establishing new facilities and entering into acquisitions and mergers to develop and launch new products. These strategies are likely to propel the montan wax market during the forecast period. On February 26, 2018, Clariant launched a family of high-performance waxes based on renewable feedstock. This is a non-food-competing by-product from the production of rice bran oil and is available in large quantities. In August 2017, ALTANA acquired a technology portfolio and R&D platform from NuLabel Technologies, Inc. based in the U.S. It comprises innovative technologies of additive manufacturing of sustainable decoration solutions as well as novel technology for resalable packaging.

Based on end-use industry, the global montan wax market has been divided into cosmetics, pharmaceuticals, rubbers, plastics, electrical, wax polishes, machinery, agriculture & forestry, leather & textiles, and others (including metal, wood, and stone). Montan wax is primarily used for wax polishes. It is used for floors, furniture, leather care polish, and car polish applications. Wax is helps improve feel and appearance of materials and surfaces. Furthermore, montan wax is employed as high performance additive in the plastic industry. It is used as combined external and internal lubricants, nucleating additives, and dispersing agents in various types of plastics and processing methods.

The report comprises detailed value chain analysis, which provides a comprehensive view of the global montan wax market. The Porter’s Five Forces Analysis model for the montan wax market has also been included to help understand the competition landscape of the market. The study encompasses market attractiveness analysis, wherein function and end-use industry segments have been benchmarked based on their market size, growth rate, and general attractiveness.

The report provides size (in terms of volume and value) of the montan wax market for the base year 2017 and the forecast for the period between 2018 and 2026. Market numbers have been estimated based on function and end-use industry segments. Size and forecast of each major function and end-use industry segment have been provided in terms of the global and regional markets.