With the escalating need for industrial mobile robots to enhance workplace efficiency, the global market for mobile robotics is registering a significant progress in its size and valuation. These mobile robots have the ability to move inside the factories without modifying the factory layout and they can also re-plan their routes autonomously to avoid obstacles, which make them highly effective in the factory setup. Owing to these factors, companies are prompted to deploy mobile robots in their plants, which is reflecting greatly on the sales of mobile robotics.

Over the coming years, the significant increase in labor costs, aging workforce, and the rising demand for productivity are expected to drive the growth of the global market for mobile robotics remarkably. However, the high initial investment may limit the uptake of these robots, which may impact the overall market negatively in the near future. 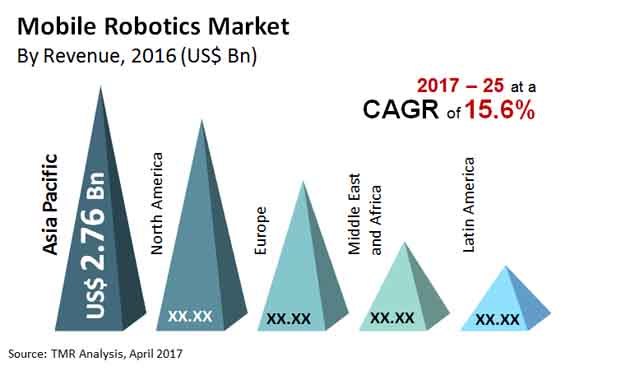 Unmanned aerial vehicles are also projected to witness a substantial rise in their demand over the next few years, thanks to the rising awareness regarding its usage in agriculture practices, border surveillance, and law enforcement.

Geographically, the worldwide market for mobile robotics is categorized into Latin America, North America, Asia Pacific, Europe, and the Middle East and Africa. With a share of 32.20%, Asia Pacific dominated the global market in 2016. Thanks to the increasing investment in defense and logistics sectors, the adoption of mobile robots is likely to augment remarkably in Asia Pacific, influencing the overall market in the near future.

The Europe market for mobile robotics is anticipated to gain considerably in the near future from the augmenting demand for mobile robots in warehouse automation. Apart from this, the rising adoption of these robots in various industries, such as the medical, defense, and the agriculture, is also projected to boost this regional market over the forthcoming years.

Many companies from various industrial sectors across the globe are growing focus toward achieving high efficiency at workplace. As a result, they are growing the use of industrial mobile robots. These robots are gaining traction they can move inside factories with no need to make changes in the layout of factory. In addition to this, the industrial robots hold an ability to autonomously re-plan their routes and avoid obstacles. As a result, mobile robots are considered highly efficient in various factory setups. Owing to all these advantages, the global mobile robotics market is experiencing upward sales curve.

Several industrial sectors across the globe are facing issues related to aging workforce and increased labor costs. In addition to this, increased demand for high efficiency is encouraging companies from many industrial sectors to grow the use of mobile robots. All these factors are encouraging companies for the deployment of mobile robots in their factories, which is working as a key factor boosting the expansion of the mobile robotics market.

The increasing demand for efficient manufacturing in China is leading to government initiatives being taken to equip the factories with advanced mobile robots. The province of Guangdong, China has decided to invest USD 154 billion to install mobile robots. Furthermore, major manufacturers like Foxconn also plan to install more than a million robots in the next few years. China is world’s leading producer of a majority of items ranging from clothes to electronics. However, the country primarily depends on low cost and low skilled labors. The rising labor wages and slow economic growth has prompted the government to diversify its workforce and make the manufacturing facilities technology advanced. This factor has resulted into the increasing adoption of mobile robots in manufacturing industries.

However, one factor limiting the demand for mobile robotics is the high cost for installation of these robots. Furthermore, purchasing an automated guided vehicle (AGV) is very costly when compared to hiring personnel or buying equipment. In addition, these robots undergo frequent wear and tear due to continuous function and need to undergo regular maintenance. The cost of maintenance is also high for these robots. Moreover, factories with smaller operations might not have access to such huge capitals and hence are unable to afford such robots. However, the falling prices of the components are expected to lower the price of AGVs in future. The high initial cost involved with these robots is expected to hinder the growth of the market moderately during the forecast period.

The global mobile robotics market has been segmented by types into unmanned aerial vehicle (UAV), unmanned ground vehicle (UGV), unmanned surface vehicle (USV) and autonomous underwater vehicle (AUV). The UGVs held the largest market share during the forecast period. These robots are now widely used in medical and healthcare segment for delivery of medicines and equipment and instruments. Increasing use of mobile robots in defense is one of the important factors bolstering the demand of unmanned ground vehicles in the global market. Since these vehicles operate autonomously, they can be used to accomplish missions in dangerous, inconvenient and difficult situations.

By application, the global mobile robotics market has been bifurcated into industrial and services segment. The service application segment has been anticipated to hold the largest market share. Regionally, the global mobile robotics market has been categorized into North America, Europe, Asia Pacific, Middle East and Africa and Latin America. Asia Pacific has been analyzed to be largest and fastest growing region during the forecast period. The increasing adoption of mobile robots in developing countries such as India and China is aiding to the demand for this market in this region.

The segments covered in the global mobile robotics market are as follows: