Radar systems are crucial in the detection of bombs and landmines that are not visible to the naked eye. One of the key products witnessing high demand in the global military radar marketplace is lightweight radars. High demand for these radars can be attributable to immense potential for their use in the domestic defense sector. Additionally, the global military radar market is currently being driven by increase in spending by countries to strengthen their border and domestic defense forces. Several incidences of civil unrest and terrorism worldwide are prompting several countries to amplify their defensive arrays, of which military radars form an irreplaceable component. However, wind turbines being installed in growing numbers across the world pose a key hindrance to military radars, as the movement of turbine blades can degrade radar reception significantly. 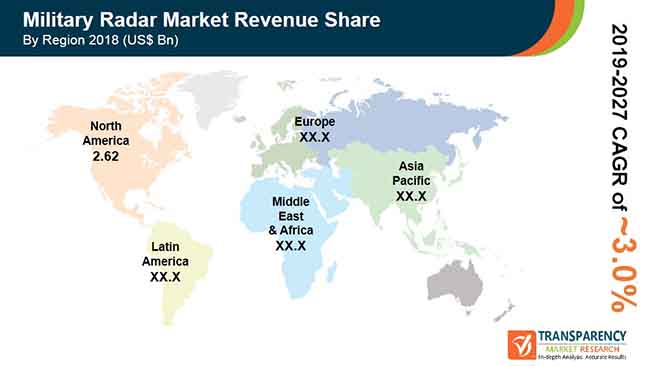 Stuck in a neck-to-neck competition with other brands? Request a custom report on Military Radar Market

Key players operating in the global military radar market include

Radars are used in a plethora of defense applications such as aircraft, missiles, ships, and spacecraft. The growing concerns about strengthening defense capabilities may bring tremendous growth opportunities for the military radar market. The escalating need for enhancing border safety is prognosticated to fuel the demand for surveillance equipment and systems. Thus, these factors may boost the growth of the military radar market during the assessment period of 2019-2027.

This market research study analyzes the global military radar market and provides estimates in terms of revenue (US$ Mn) for the forecast period i.e. from 2019 to 2027. It describes the dynamics affecting the market and analyzes their anticipated impact throughout the forecast period. Moreover, it highlights significant opportunities for global market. Based on region, the global military radar market has been segmented into Europe, North America, Asia Pacific, Middle East & Africa (MEA), and South America. In addition, the market has been segmented based on type into ground-based, naval, airborne, and space-based. Market segments have been estimated in terms of revenue (US$ Mn).

Radio detection and ranging (radar) systems help detect the range, direction, altitude, and speed of an object. Radar systems aim to combat any threat or attack and avert any damages to human life and property. Radar systems are used in several other applications. For instance, they help resolve navigational issues and track devices. Radars help determine the distance and speed of objects with precision and accuracy. Military radars are employed for several purposes such as search operations, fire control, and bombing or shelling. Military radars are used to locate planes and ships at large distances. Fire control radars provide the precision of bearing and range. These radars help operate artillery weapons. Bombing radars are utilized to determine the terrain to deploy attacks on a target. Besides these military operations, military radars are employed during national calamities such as earthquakes, tsunamis, and floods. Several research and development activities are being conducted to improve efficiency and reduce the size of radars. Lightness in weight, efficiency, and multi-functionality of radars are driving the global military radar market. These applications of military radars are expected to increase in the near future.

Based on type, the global military radar market has been segmented into ground-based, naval, airborne, and space-based. With advancements in technology, military radars are getting smarter, inexpensive, and smaller. Additionally, several military devices such as aircraft, ships, and tanks are equipped with radars; hence, the demand for military radars is rising. The global market for military radars is anticipated to expand significantly during the forecast period, considering the efforts to include several functions in a single radar.

The global military radar market has been segmented as below:

The report provides cross-sectional analysis of type segments of the military radar market with respect to the above-mentioned regions.