According to Transparency Market Reassert TMR's, the global manganese carbonate market, which was evaluated in 2016 to be around US$322.2 mn, is anticipated to reach nearby worth of  US$464.1 mn before the finish of 2023. The market will display a CAGR of 4.2% during the forecast period from 2015 and 2023.

By the by, the potential uses of manganese carbonate for the purpose of concrete staining is expected to support its deals in future. concrete staining is gradually developing as prominent strategy to make durable, decorate, and simple to keep up home surfaces. The rising utilization of manganese carbonate to recolor solid surfaces will reinforce its scope in the future years. 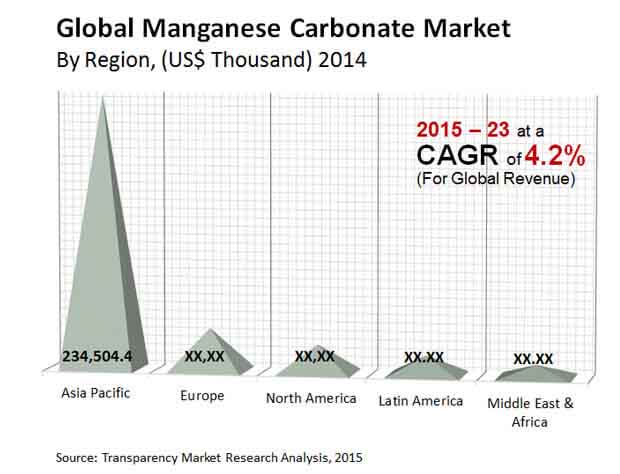 The rising utilization of manganese carbonate as an important farming micronutrient will extensively fuel their deals. This chemical is regularly added to plant composts as a treatment for crops with manganese-insufficiency. Farming part still holds strength over a few rising economies in Latin America and Asia Pacific. Thus, these regions are anticipated to give lucrative chances to manganese carbonate makers, as they project rising demand regarding micronutrient manures.

Advancement in Farming Techniques to Support Dominance of Asia Pacific

This study analyzes, estimates, and forecasts the global manganese carbonate market in terms of volume (Tons) and revenue (US$ Thousand) from 2014 to 2023. Market numbers given in the report describe the global demand for manganese carbonate, but not the production or supply. The manganese carbonate report also analyzes several driving and restraining factors and their impact on the market during the forecast period.

The report provides detailed analysis of the manganese carbonate market by key applications. It segments the market into the following key applications: agrochemicals, glaze colorant, chemical intermediates, and others (food supplement, medical, etc.). The report also segments the market based on major geographies into North America, Europe, Asia Pacific, Latin America, and Middle East & Africa. It further provides volume and revenue for each application segment for each region. This includes 12 unique country-specific analysis.

Based on the application, the report analyzes the attractiveness of each segment with the help of an attractiveness tool. The study includes value chain analysis, which provides a better understanding of key players in the supply chain from raw material manufacturers to end-users. Additionally, the study analyzes market competition through Porter’s Five Forces analysis.

The report segments the global manganese carbonate market as: