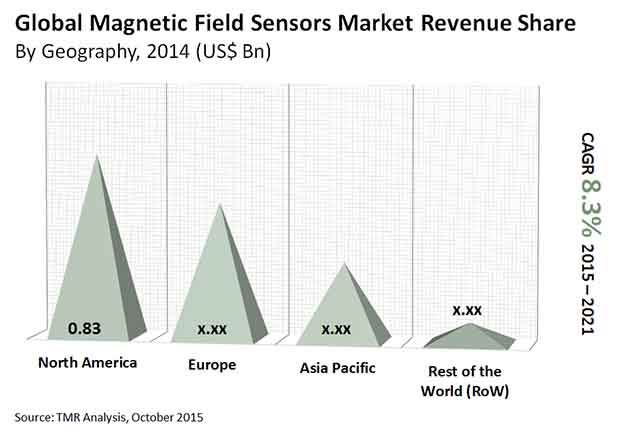 North American Market to Expand at a Boisterous Rate

Magnetic field sensor is a device which is used for studying the field around electrical devices, coils and permanent magnets. These sensors were previously used only for direction finding or navigation by sensing the Earth’s magnetic poles. However, the application of magnetic field sensors have expanded vastly as different industries have adopted a variety of these sensors to detect the direction, presence or strength of not only earth’s magnetic field, but also from magnetized soft magnets, permanent magnets, vehicle disturbances and fields generated from electric currents. Demand for better efficiency and high sensing performance is fuelling the adoption of these sensors in various applications. The global magnetic field sensors market has been segmented on the basis of technology, types, applications and geography. A cross sectional study of the market broadly across four major regions has also been covered under the purview of the study.

Many factors, such as surge in demand for these sensors in the automobile industry, increase in demand for consumer electronics and appliances and growing popularity of electronic compasses are driving the growth of overall magnetic field sensors market. Stringent government regulations across North America and Europe are encouraging the widespread adoption of energy-efficient and eco-friendly devices. Magnetic field sensors are one of the core components of these products. Therefore, increasing demand for power efficient and smarter electronic devices has significantly increased the demand the usage of these sensors over the last decade. Furthermore, the healthy economic growth of emerging markets such as China, India and Taiwan is also boosting the growth of the latest technologies, which is in turn, fuelling the demand for magnetic field sensors. The conjoint effect of all these trends and drivers is thus set to bolster the growth of the global market during the forecast period.

Various government policies globally are setting standards for lower fleet-average fuel consumption and providing financial incentives for vehicle electrification, which is triggering the drive to reduce fuel consumption in the automotive sector. This in turn has resulted in the growing demand for electrified vehicles. The usage of advanced magneto-resistive sensors is anticipated to steadily increase in the field of electric drives. This is expected to offer potential growth opportunity to the global magnetic field sensors market. Moreover, emerging economies such as India and China, with their massive population are providing an enormous market for the new innovations in automotive sector. Rising awareness among consumers has given rise to favorable conditions for the consumer electronics market in Middle East and Africa. This in turn, is expected to further bolster the market growth of magnetic sensors.

The competitive profiling of the leading players in the global magnetic field sensors market across four major geographic regions is also covered under the scope of the report. These include various business strategies that have adopted by the major players and the recent developments as per the secondary data available. In order to provide a competitive insight of global magnetic field sensors market, the market attractive analysis has been provided in the report.

A comprehensive analysis of market dynamics that include the market drivers, restraints and opportunities is included under the purview of the study. Market dynamics are the distinct factors which exert an influence on the growth of a particular market and therefore help in studying the current trends of the global market. Thus, this report offers an inclusive study of the global magnetic field sensors market, along with providing the forecast of the market for the period from 2015 to 2021.

The global magnetic field sensors market has been segmented into: