Strong Presence of Substitutes Could Weaken Demand for Magnesium Derivatives

The magnesium derivatives market is projected to grow 1.5X over 2019-2027, with magnesium oxide accounting for a significant chunk of the revenue. The availability of direct substitutes of magnesium derivatives could weaken their demand; however, increase in revenue channelized by agriculture, pharmaceutical, and construction industries holds favorable opportunities.

To put the movement of the magnesium derivatives market into perspective, a recent study published by Transparency Market Research (TMR) finds that, the intensified focus of developed countries on providing a sanitized environment to their citizens is likely to amplify opportunities for market players in the wastewater treatment sector, which is huge, since the treatment of wastewater is required in chemical industries, municipal waste treatment centers, and even in power plants.

The same opportunities are anticipated to be on the horizon in developing countries in the coming years, with increasing government initiatives taken toward ensuring proper hygiene conditions. Besides these microeconomic factors, industrialization and urbanization also play an integral part in upgrading the lifestyles of consumers, which is subsequently strengthening demand in the magnesium derivatives market space. 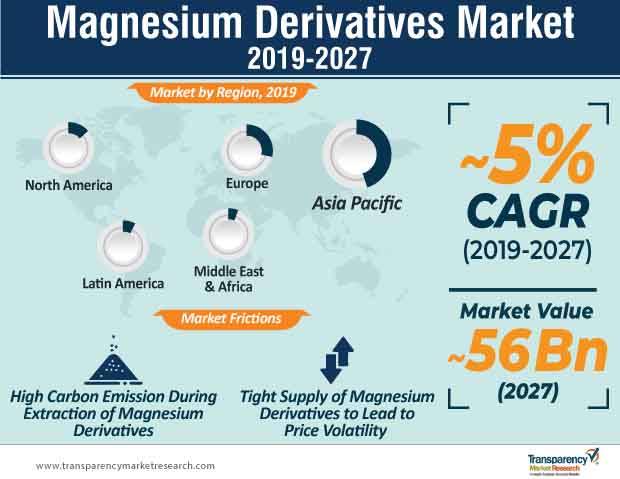 Environmental sustainability concerns put enormous pressure on players in the magnesium derivatives market, given the challenge associated with the carbon emission during ore mining. Taking the poor ergonomics of magnesium mining sites into consideration, several regulations such as the Clean Air Act (CAA), National Environment Protection Act (NEPA), and Toxic Substances Control Act (TSCA) are anticipated to up the stringency level, and increase the scrutiny of mining and chemical production processes. However, producers who invest in automation to limit human interference will be safeguarded from fines or bans regarding these regulations.

Preference for Magnesium Oxide to Remain High Over Other Derivatives

As per TMR’s study, the demand for magnesium oxide is projected to advance at a CAGR of ~5% during the forecast period. Among others, the refractory applications of this derivative, in the form of fused magnesia and dead-burned magnesia, are projected to grow at a marginal rate. This derivative, in turn, boasts of a versatile status, with the frontiers of its applications extending to the agriculture, iron and steel, pharmaceutical, water waste treatment, and construction industries.

When the potential of magnesium oxide was recalibrated, Asia Pacific was, and is, estimated to continue being on the vanguard, with China as the leading market. The high population density demanding residential and sanitized conditions in China is likely to attract numerous market players to address the local demand in the region.

Investments in the market are primarily made to enhance production capacity. For example, Shouguang Dingsheng Chemical Co., Ltd. announced that it had set up a magnesium chloride production facility that currently holds the competency to produce flakes, with a capacity of around 20 thousand tons a year. The support of the Chinese government, in the form of funding, and the 12th Fifth Year Plan that promotes commercialization and industrialization, is likely to take the growth of the magnesium derivatives market in China forward. 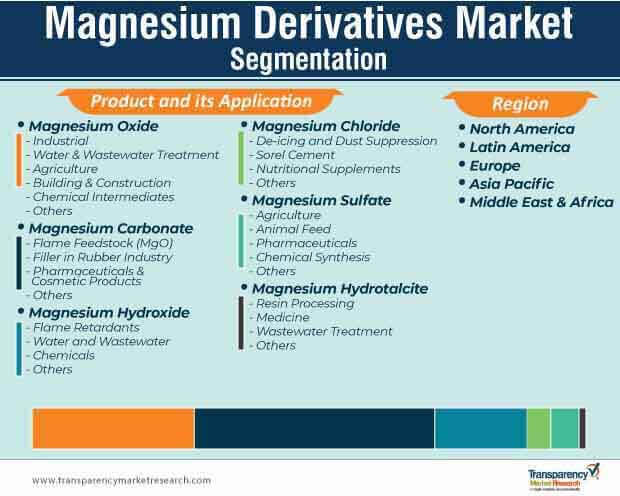 Looking for Regional Analysis or Competitive Landscape in Magnesium Derivatives Market, ask for a customized report

Post the compilation of resourceful insights and extensive analysis, seasoned analysts at Transparency Market Research (TMR) opine that, the magnesium derivatives market will move ahead at a steady pace. Among other derivatives, analysts recommend that, investments in the production of magnesium oxide can be considered risk-free, while a smarter switch toward the production of magnesium sulfate is projected to offer progressive RoI growth.

To win in the extant magnesium derivatives market, increased commitment toward catering to the need of refractory and flame-retardant industries can offer better penetration. Since the tight supply of magnesium derivatives can directly pass on the additional cost incurred to end-use products, an effective price-control strategy can translate into better sales prospects.

However, while venturing into new markets, it is crucial to study the regulations encircling chemical production to gain better exposure. Also, expansion of production capacity in developing countries can help in marginally reducing overall operational costs.

The report offers intricate dynamics about different aspects of the global magnesium derivatives market that aid companies operating in the market in making strategic development decisions. It also includes a key indicator assessment to highlight the growth prospects of the global magnesium derivatives market, and estimates statistics related to market progress in terms of value (US$ Mn) and volume (million tons).

The report provides detailed information about the global magnesium derivatives market on the basis of comprehensive research on various factors that are playing a key role in accelerating market growth. Information mentioned in the report answers path-breaking questions for companies that are currently functioning in the market, and are looking for innovative ways to create a unique benchmark to help them make successful strategies and target-driven decisions.

The research methodology adopted by analysts for collating the magnesium derivatives market report is based on detailed primary as well as secondary research. With the help of in-depth insights of the market-affiliated information that is obtained and legitimated by market-admissible resources, analysts have offered riveting observations and authentic forecasts of the magnesium derivatives market.

For primary research, analysts have interviewed industry stakeholders, investors, brand managers, vice presidents, and sales and marketing managers. Based on the data obtained through interviews of genuine resources, analysts have emphasized the changing scenario of the magnesium derivatives market.