Location based virtual reality is a suite of hardware and software components that enable end-users to visualize and experience virtual environment in real-time. Virtual reality includes hardware and software that is required to provide a virtual environment of real or imaginary subject and further interact with it. Demand for location based virtual reality is expected to rise globally, largely due to rising applications in end-use sectors such as healthcare, education, gaming, and media and entertainment.

The location based VR market are expected to expand substantially from 2017 onwards and expand at a moderate pace till 2021, owing to increasing possibilities of application in various end-use sectors such as retail, automotive, gaming etc.. Furthermore, the market is expected to expand toward the latter half of the forecast period (2022–2025), due to extensive adoption of hardware components, such as headsets and glasses, and increasing application of software and services among end-users. The location based VR market is expected to see value generation in commercial sector from year 2019.

The global location based VR market is anticipated to observe growth over the timeframe of analysis. Growth of the market is mainly ascribed to technological progress in the field of virtual reality. There has been a rise in the utilization of VR technology together with the augmented investment in the technology of virtual reality (VR). This factor is estimated to support development of the global location based VR market in the years to come.

There has been an augmented popularity of 360-degree content along with increased deployment of this technology indicates toward widespread acceptance of VR technology. As the popularity grows, it is expected the price of various virtual reality hardware components, such as VR headsets and joysticks will decrease. These factors are likely to work in favor of the growth of the global location based VR market in the near future.

In various sectors, such as entertainment, media, and gaming, the demand for virtual reality technology is rising exponentially. Such high demands for this technology from across industries are estimated to open up new growth opportunities for the global location based VR market in the near future.

Technological progress made in the field of virtual reality technology is triggered by the development in 5D, 4D, and 3D technologies, which has led to considerable advancements in the entertainment industry. Viewers are now able to witness 360-degree content in an all-around view of a scene. VR games support much improved gaming experience as it supports 360-degree content. The popularity of 360-degree is expected to rise as location based VR technology is coming up as one of much sought after mainstream gaming platforms. These factors are estimated to support development of the global location based VR market in the years to come.

The prevalence of Coronavirus has resulted in unprecedented global recession and several companies across the globe have been forced to take strict measures, such as salary deductions, laying off employees, and so on. Several small businesses have shut their operations and manufacturing activities have been brought to a halt. Given such grim situation worldwide, the global location based VR market is likely to witness setback in the next few months to come. 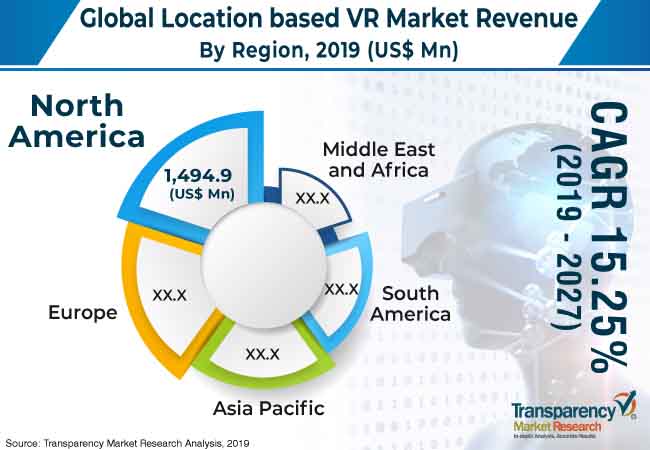 Some of the high investments in the developments of technology were made by technological giants such as QUALCOMM Ventures, Samsung Venture, Oculus, and Google Ventures. These technology giants are trying to create a monopoly in the market through investments and partnering with new emerging startups. The market is estimated to witness similar investment scenario from private venture capitalists and technology giants during the forecast period. Adoption of technology is higher in the gaming, media and entertainment sector, as compared to other sectors in the industry. Current advancements in technology in location based VR are boosting the expectation of end-users to experience virtual surrounding in different applications, irrespective of any location or time. Hardware developers have been introducing or updating location based VR enhancements in the last few years in order to improve user experience.

The global location based VR market has been segmented based on component, end-use, application, technology type, and region. Based on component, the market has been divided into hardware and software. The hardware segment has been further split into head mounted display, head up display, glasses, sensor/input, and camera. Based on end-use, the market has been segregated into amusement park, themed attraction, 4D films, automotive, retail & transport, and healthcare. In terms of application, the location based VR market has been split into entertainment, media, training/ simulation, navigation, sales, and medical. Based on technology type, the market has been classified into 2 Dimensional (2D), 3 Dimensional (3D), and cloud merged reality (CMR). According to the analysis, adoption of 3D and cloud merged reality technologies is expected to be considerably high, as constant developments are being introduced in the market, while the data stored in cloud is easier to fetch, independent of location and time. Therefore, adoption of CMR technology is increasing across all regions. Moreover, adoption of location based VR in the automotive industry is increasing in Europe owing to the presence of a large number of automotive industries in the region. Applications of location based VR is also increasing in the healthcare industry, as patients are advised to play VR games in order to reduce anxiety.

In terms of revenue, North America holds a prominent share of the global location based VR market due to considerable adoption of location based VR in the region, awareness about the technology and technological developments among customers is increasing across the region. Additionally, increasing usage of location based VR across applications such as gaming, media and entertainment is projected to boost the market during the forecast period. Demand for location based VR is rising in Europe and Asia Pacific, due to the increasing number of 4D films, amusement parks, and themed attractions in these regions owing to the rise in young population in these regions. In Europe, companies are implementing advanced customer support solutions, such as chatbots and social media platforms, for continuous interaction and reviews. Furthermore, expansion of manufacturing industries in Asia Pacific is boosting the application of location based VR in the automotive industry in the region.

The location based VR market report provides analysis for the period 2017–2027, wherein the period from 2019 to 2027 is the forecast period and 2018 is the base year. The report covers all the major trends and technologies playing an influential role in the expansion of the market during the forecast period. It also highlights the market dynamics, which comprise drivers, restraints, and opportunities, for the analysis of market growth during the said period. Connectivity requirement analysis is also provided in the research scope. The study provides a complete perspective on the evolution of the global location based VR market throughout the above mentioned forecast period in terms of revenue (US$ Mn).

The market overview section of the report demonstrates market dynamics such as drivers, restraints, and opportunities that influence the current nature and future status of this market, besides the challenges of the market. The market overview section also includes connectivity requirement analysis based on connection requirement for the VR devices such as WiFi connectivity, 4G, and 5G. Additionally, market attractiveness analysis has been provided for every segment in the report, in order to offer a thorough understanding of the overall scenario in the location based VR market. The report also provides an overview of various strategies adopted by key players present in the market.

Global Location Based VR Market: Scope of the Report

The report also highlights the competitive landscape of the market, positioning all the major players according to their presence in different regions of the world, and initiated by them in the market. The comprehensive location based VR market estimates are the result of our in-depth secondary research, primary interviews, and in-house expert panel reviews. These market estimates have been analyzed by taking into account the impact of different political, social, economic, and technological factors along with the current market dynamics affecting the location based VR market growth.

This report provides all the essential information required to understand the key developments in the location based VR market and growth trends of each segment and region. It also includes companies’ strategies, business overview, business portfolio, and financial information, under the company profile section. Furthermore, the Porter’s five forces analysis explains the five forces, namely, buyers bargaining power, suppliers bargaining power, threat of new entrants, threat of substitutes, and degree of competition in the location based VR market. This report also provides a comprehensive ecosystem analysis of the market. It explains the various participants, including software & platform vendors, system integrators, intermediaries, and end-users within the ecosystem of the market.

Primary research involves telephonic interviews, e-mail interactions, and face-to-face interviews for detailed and unbiased reviews on the location based VR market, across geographies. Primary interviews are usually conducted on an ongoing basis with industry experts and participants in order to get latest market insights and validate the existing data and analysis. Primary interviews offer firsthand information on important factors such as market trends, market size, competitive landscape, growth trends, outlook etc. These factors help to validate and strengthen secondary research findings and also help to develop the analysis team’s expertise and market understanding. Moreover, the data collected and analyzed from secondary and primary research is again discussed and examined by our expert panel.

The global Location based VR market is segmented as below: