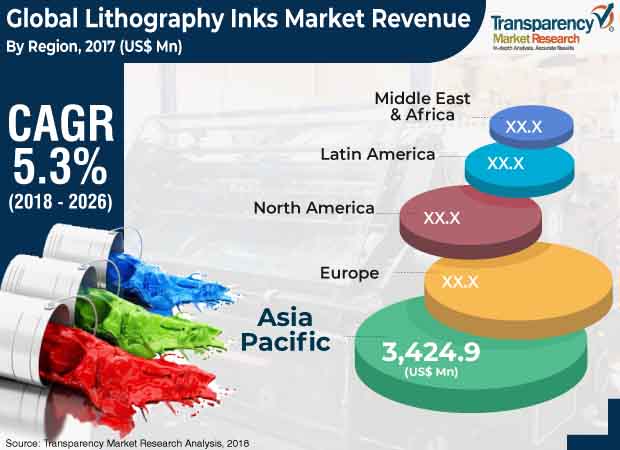 The global lithography inks has been segmented based on ink type, application, and region. In terms of ink type, the market has been divided into water-based, solvent-based, and others (including hybrid inks and UV-cured). The solvent-based segment dominated the market in 2017. Demand for petroleum-based solvents has been decreasing due to the increase in number of regulations over VOC emissions from paints and coatings, printing inks, and industrial and domestic cleaning products; and rise in environmental awareness. Less harmful and environment-friendly solvents are replacing petroleum-based solvents.

The report comprises detailed value chain analysis, which provides a comprehensive view of the global lithography inks market. The Porter’s Five Forces model has also been included to help understand the competition landscape of the market. The study encompasses market attractiveness analysis, wherein ink type and application segments have been benchmarked based on their market size, growth rate, and general attractiveness.

The report provides size (in terms of volume and value) of the lithography inks market for the base year 2017 and forecast for the period between 2018 and 2026. Market numbers have been estimated based on ink type and application segments of the market. Market size and forecast for each ink type, and application segment have been provided for the global and regional markets.