A laser a light-emitting device that consists of a laser diode, circuit board, case, and optics. Electric components on the circuit board and laser diode are usually made up of semiconductor materials, metals, and ceramics. Semiconductor materials include compounds/alloys of aluminum, gallium, arsenic, phosphorous, indium, and similar elements. These semiconductor materials also contain metals such as gold, aluminum, and tantalum. The circuit board used in a laser is typically composed of synthetic resin, usually epoxy, with glass fibers to strengthen it. The circuit board is connected to the various components using lines of metals such as aluminum and copper. Semiconductor parts used in a laser are encapsulated in plastic with metal leads that are connected to metal pads on the circuit board with a solder. Solder is a metal alloy made up of tin and lead; however, in recent years, lead has been replaced by other metals. Non-semiconductor parts in a laser are composed of materials such as metal, plastic, glass, and ceramic. Optics used in a laser can be prepared with glass; however, they are usually made from acrylic plastic, which is more economical than glass. The casings used in a laser are usually made up of materials such as metal, plastic, or wood. It may also have metal contacts with batteries, usually prepared from brass. Usage of these materials varies as per requirement of end-user applications and also depends upon the laser device manufacturer.

Major raw materials used in laser manufacturing include glass, plastic, metal, ceramic, and others along with the processing medium, which is the source of optical gain within a laser. In terms of demand, metals dominated the laser material market in 2014 and accounted for over 45% of the demand share in the same year. Metals are primarily consumed in the production of electric components of laser, laser diodes, semiconductor, and casing of laser. Glass is the fastest-growing product segments of the laser material market. Ceramic is also one of the fastest-growing product segment of the laser material market. Ceramics are principally consumed in semiconductor parts, non-semiconductor parts, and in the manufacture of circuit boards. 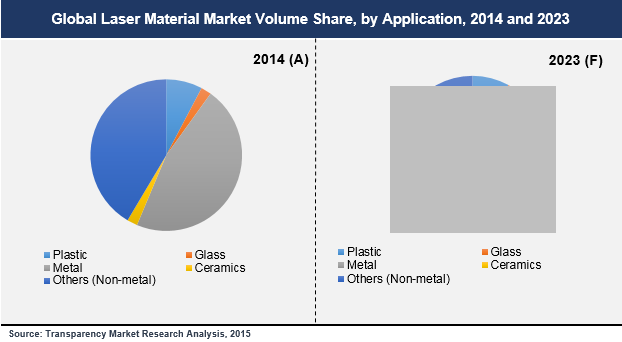 We have included a detailed analysis of the value chain to provide a comprehensive view of the laser material market. Value chain analysis provides details such as integration in the market, distribution channels, product segments, and application market. Analysis of Porter’s Five Forces Model has also been included to help understand the competitive landscape of the laser material market. The study encompasses market attractiveness analysis, wherein application segment of the market is benchmarked based on market size, compound annual growth rate (CAGR), and general attractiveness.

The study provides a decisive view of the laser material market by segmenting it on the basis of products and applications. Product and application segments have been analyzed based on current and future trends, and the market has been estimated from 2015 to 2023 in terms of volume (Kilo Tons) and revenue (US$ Mn). Regional segmentation includes current and forecast demand in North America, Europe, Asia Pacific, Latin America, and the Middle East & Africa. It also includes demand for individual products and applications in major countries in respective regions.

Constant currency rates have been considered while forecasting the market. Prices of materials used to make laser device vary in each region; hence, a similar volume-to-revenue ratio does not follow for each individual region. Regional average price has been considered while breaking down the market by product segment and application in each region. Models and estimates have been used to produce comprehensive data sets when hard data was not available. We have used the bottom-up approach by considering individual product and application segments and integrating them to arrive at the global market. Product segment and applications have been further divided using the top-down approach to derive the consumption of products in the regional market.

The laser material market has been segmented as follows: