Laser technologies have evolved at a rapid pace over the past few decades, and are increasingly being used across an array of domains, including spectroscopy, medical sciences, space sciences, holography, power & microelectronics, industrial engineering, and directed military weapons. The adoption of lasers across defense and military sector has witnessed consistent growth over the past decade, owing to its superior functional properties than that of conventional radars. The surge in the deployment of lasers across the defense sector worldwide is a major factor that is projected to drive the growth of the laser designator market during the forecast period.

In current avionics systems, some of the most extensively used laser devices to direct the laser-guided weapons (LGW) with high precision include laser target indicators and beam riders. Scientific and technical progress over the past decade has played a key role in increasing the deployment of lasers in the defense sector. The growing demand for laser designators for airborne military applications is another major factor that is likely to boost the prospects of the laser designator market during the assessment period. Although the steep initial costs could hinder the adoption of laser designators, the growing awareness pertaining to long-term cost-effectiveness is likely to open up new opportunities for market players. At the back of these factors, the global laser designator market is expected to attain a market value of ~US$ 4 Bn by the end of 2027. 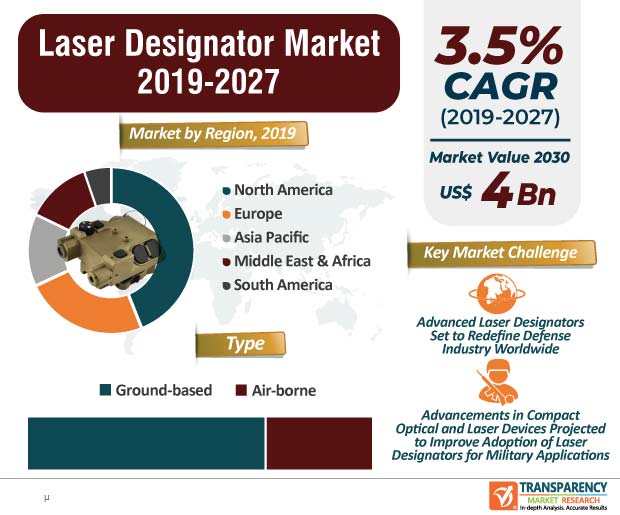 Technological advancements have enabled the development of cutting-edge laser technologies and laser systems due to which, the demand for the same from the defense sector across the world is on the rise. Laser weapons have emerged as an ideal alternative for conventional weapons due to a host of factors, including light-like transmission speeds, decline in collateral damage, and exceptional assistance in performing low profile & covert operations. Owing to advancements in technology, an array of lasers with various operating efficacies, spectral bandwidth, wavelength, and power ranges are available.

The notable developments in compact optical and laser devices have played an imperative role in enhancing the ability of laser designators for military applications. Laser technologies are likely to revolutionize modern warfare, and are increasingly being used for critical roles and applications, including sensing devices, data relays, target laser designators, weather regulators, and directed energy weapons. At present, within the laser designator market, a great amount of research is being carried out to assess the potential of high-energy laser weapons. One of the key aspects of modern warfare systems is the ability to track, identify, and take down the designated target wherein cutting-edge laser designators and range finders are deployed. Laser designators are extensively used for 3D vision and position control. Laser technology has, time and again, played an essential role in modernizing military warfare, and with rapid advancements in the laser technology, the adoption rates are expected to remain higher during the forecast period.

From Land to Water – Laser Technologies to Revolutionize Defense Sector

As laser technologies continue to evolve at a rapid pace, the adoption of laser designators has witnessed considerable growth over the past few years. At present, the military or the defense sector of several countries are investing significant resources to expand their military prowess and upgrade their existing defense systems. For instance, recent news revealed that the U.S. Navy is focusing on the development of lasers for submarines that are likely to disable guidance systems used in drones. Laser technologies are increasingly being deployed to achieve that objective due to which, market players in the current laser designator market are expected to capitalize on such opportunities to gain advantage. Several nations are increasingly spending resources to develop airborne lasers to improve the detection of hostile submarines and other potential looming threats.

The novel COVID-19 pandemic has primarily crippled operations across a host of industries. Several countries are compelled to announce either complete or partial lockdowns, which in turn are expected to majorly affect the operations of participants operating in the laser designator market. Although a majority of the market participants anticipate a high impact on their operations, the effect is expected to be lower than that of the aerospace industry. Companies operating in the current market for laser designators are likely to take fiscal measures to minimize the COVID-19 impact by exploring the possibilities of delayed draw-term loan agreements to retain capital. In addition, defense spending is likely to remain significantly lower, particularly in 2020 and 2021 due to which, the demand for laser designators could decline. 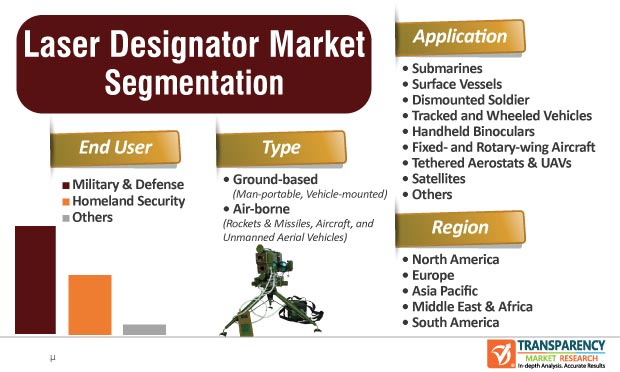 Stuck in a neck-to-neck competition with other brands? Request a custom report on Laser Designator Market

The global laser designator market is expected to grow at a moderate CAGR of ~4% during the forecast period. The market growth can be primarily attributed to a host of factors, including advancements in laser technologies, growing investments in research & development activities, focus on upgrading defense capabilities by multiple nations, and shortcomings of conventional weapon systems. As the COVID-19 pandemic continues to affect operations, laser designator market players should focus on diversifying their business operations and formulate effective growth strategies to retain their market position. While the demand from the defense sector is expected to remain sluggish, market players are anticipated to determine potential applications in other industries.

Key indicators of market growth, which include value chain analysis and compounded annual growth rate (CAGR), are elucidated in TMR’s study in a comprehensive manner. This data can help readers interpret the quantitative growth aspects of the global laser designator market.