Kaposi sarcoma (KS) refers to a type of cancer that develops from the cells lining blood vessels or lymph nodes. The cancer usually appears as tumors on mucosal surfaces or on the skin, but can also develop in body parts such as the digestive tract, or the lungs. The abnormal KS cells cause brown, purple, or red blotches on the skin, called lesions.

The global Kaposi sarcoma market features a rising number of regional vendors commanding prominent shares in their respective regional territories. Owing to the looming patent expiries of several blockbuster drugs, the market is expected to witness the entry of several new companies producing generics. The situation also presents immense growth opportunities for leading companies with new drug formulations in the next few years. 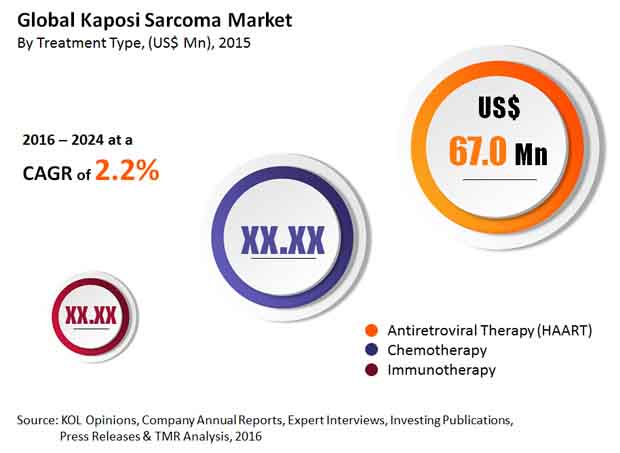 Over the report’s forecast period, however, the segment of chemotherapy is expected to exhibit growth at the most promising pace, chiefly owing to the high treatment cost and the high preference given to the treatment method by immunocompetent patients. Some of the most popular chemotherapy drugs in the market are vincristine, docetaxel, paclitaxel, bleomicin, daunorubicin, and liposomal doxorubicin. Although the high preference to this treatment method, its high cost could emerge as a key deterrent to patient population across some regions, especially across developing and less developed economies across Asia Pacific and Africa, limiting its growth prospects.

From a geographical standpoint, North America is presently the leading contributor of revenue to the global Kaposi sarcoma market. The region holds a leading position in the global market owing to the presence of some of the world’s leading vendors in the field and the rising costs of drugs. The North America market for Kaposi sarcoma also benefits from the high rate of diagnosis of the condition and the easy availability of drugs. The region features a low incidence rate of the disease but has been witnessing a shortage in supply of drugs required for its treatment, leading to a wide demand-supply gap and subsequently significant scope of growth.

Over the report’s forecast period, the market is expected to witness the most promising rate of growth in the Middle East and Africa region. The region is expected to lead to the heightened demand for Kaposi sarcoma drugs owing to the high rate of incidence of the disease. The high rate of prevalence of HIV/AIDS is and thus the increased prevalence of AIDS induced Kaposi sarcoma in Eastern Africa is also a key driving factor, along with the fact that awareness among people is low.

Cancer has affected many people around the globe. Various cancer types are responsible for a large number of fatalities across the world. Kaposi Sarcoma is one of them. The rising prevalence of Kaposi Sarcoma across many individuals will serve as a prominent growth-generating factor for the global Kaposi Sarcoma market during the assessment period of 2016-2024.

Kaposi sarcoma is a soft tissue sarcoma that develops in connective tissues, blood vessels, fibrous tissues, and muscles. It is a malignant, multi-centric, neoplastic vascular proliferation, characterized by the development of bluish-red cutaneous nodules on the feet. According to the U.S. Center for Disease Control and Prevention (CDC), Kaposi sarcoma is considered an acquired immune deficiency syndrome (AIDS) defining disease. This report analyzes the current and future prospects of the market based on type of treatment, distribution channel, and geography.

The report is a combination of primary and secondary research, conducted for understanding and arriving at trends, used to forecast the expected revenue of major Kaposi sarcoma therapies in the near future. Primary research formed the bulk of our research efforts with information collected from in-depth interviews and discussions with a number of key industry experts and opinion leaders. Secondary research involved study of company websites, annual reports, press releases, investor presentations, and various international and national databases. The report provides estimated market size in terms of US$ Mn for each treatment method, distribution channel, and geography for the period 2014 to 2024, considering the macro and micro environmental factors. The revenue generated from each treatment method was calculated by considering number of patients, average cost of the drugs, trends in the industry, distribution channel trends, and adoption rate of therapy across all the geographies. The revenues generated from services, including surgery and radiation therapy were calculated based on the costs and average number of procedures.

The market report comprises an elaborate executive summary, which includes a market snapshot that provides information about various segments of the market. It also provides information and data analysis of the market with respect to market segments based on type of treatment, distribution channel, and geography. The market overview section of the report analyzes market dynamics such as drivers, restraints, and opportunities that influence the Kaposi sarcoma market in the current and future scenario. The report provides the list of drugs in various stages of clinical trials, which are expected to shape the future course of the market, through pipeline analysis. The report also provides value chain analysis of the market that describes the sequence of activities from drug manufacturing to the final destination, which is the end user.

Market share analysis is provided to highlight percentage share of the major players operating in the market. All these factors will help market players to decide business strategies and plans to strengthen their position in the global market. Based on geography, the market has been analyzed for major regions: North America, Europe, Asia Pacific, Latin America, and Middle East and Africa. Market forecast for major countries in these regions have also been provided for the forecast period.

The global Kaposi Sarcoma market has been segmented as follows: