Gas regulator is the device for regulating a variable inlet pressure to a constant possible outlet pressure. Regulators are majorly used for liquids and gases, and consist of a separate pressure sensor with a flow valve and controller, or can be an integral device with an output pressure setting, a sensor and a restrictor. The primary function of a regulator is to modulate gas flow in the system with the demand for gas required, while maintaining a constant output pressure. If the load flow increases, the regulator flow also increases, and the regulator flow decreases with the decrease in load flow to maintain controlled pressure in the pressure system. 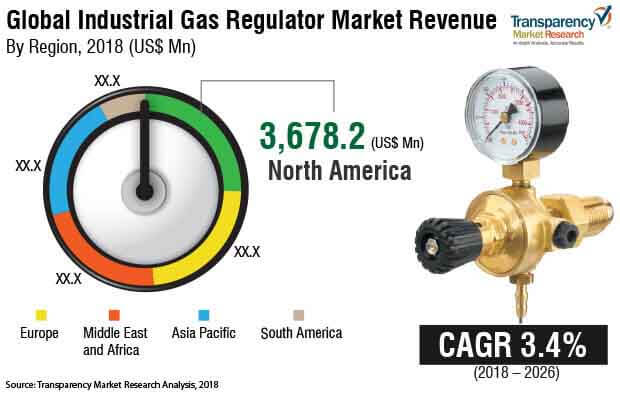 Increasing demand for industrial gases for the operation of industrial units and for power generation is expected to be the major factor spurring the growth of the market over the forecast period. Furthermore, growing demand for technologically advanced gas regulators with the increasing need for enhanced reliability, improved performance, and for reducing work redundancy is also anticipated to drive the market growth of industrial gas regulators. Growth in sectors such as medical care, manufacturing, oil & gas, chemicals & energy, and automobile arealso projected to drive the industrial regulators market. Development in technology and product innovations in the field of industrial regulators is anticipated to create robust investment opportunities for market players globally. Furthermore, abundant new supplies of oil and gas which are strengthening midstream and downstream chemicals and energy manufacturing is projected to positively impact the demand and growth of industrial gas regulators. Advancement in automobile technology is leading to the development of automobiles which run on liquefied natural gas. This is also expected to boost the growth of the industrial regulator gas market over the forecast period. However, high cost of equipment and implementation of strict regulations for safety of gas equipment may hinder the growth and development of the market.

Based on product segment, pressure reducing regulators are expected to hold the major share over the forecast period. Pressure reducing regulator is a normally-open valve which is used to regulate or reduce the undesirable, high upstream pressure and must be installed at the beginning of a system before any pressure-sensitive equipment. This essential requirement of the regulator has led to its enormous share in the market. Oil & gas industry is expected to dominate the end-user segment of the industrial gas regulator market over the forecast period. The growth of the sector is attributed to the increasing demand for gas powered power stations and automobiles. Growing demand from the chemical and oil & gas industry is projected to offer substantial opportunities for growth to the industrial gas regulator market during the forecast period. Based on regulator type, single stage regulator is expected to witness significant growth during the forecast period due to its growth in the processing and manufacturing sector for industrial general purpose applications. In addition, its low consumption of energy and availability at cheaper price is projected to drive the demand for single stage regulator. Single stage regulator is ideal for minimal inlet pressure variation applications whereas dual stage regulator is designed to handle recurrent variations in the rate of gas flow. Single stage regulator covers a variety of applications which include calibration gases, high purity gases, liquid and gas chromatography, and high purity chamber pressurization. Based on gas type, inert gas is anticipated to hold the major share in terms of revenue in the industrial gas regulator market during the forecast period. In the material segment, brass segment is projected to contribute majorly to the market in terms of revenue due to its low cost and major usage in general applications.

In North America, growth of the oil & gas sector has influenced energy-dependent industries such as power generation, and developments in processing and manufacturing sector across the region is anticipated to drive the demand for industrial gas regulators during the forecast period. The market in the Asia Pacific region is expected to grow significantly over the forecast period. Furthermore, China has a dominating presence in the consumption and production of acetylene and is also projected to be a fast growing market. China is projected to be the largest supplier and manufacturer of industrial gas regulators and equipment which is further expected to unveil high potential growth opportunities. Industries such as polymer, textile, paper & pulp, and printing which utilize huge amounts of chemicals are responsible for the supply of industrial gas regulators.

The report covers the entire overview of the market including the market dynamics such as drivers, restraints, opportunities, and trends that are predicted to impact the existing nature and prospective status of this market. The competitive position of the industrial gas regulator market is studied through the Porter’s Five Forces Analysis. Additionally, current indicators of diverse macro-economic factors are contextualized under key market indicators.

The report also highlights the competitive landscape of the market, thereby positioning all the major players according to their geographic presence and recent key developments. The comprehensive industrial gas regulator market estimates are the result of our in-depth secondary research, primary interviews, and in-house expert panel reviews. These market estimates have been analyzed by taking into account the impact of different political, social, economic, technological, and legal factors along with the current market dynamics affecting the growth of the industrial gas regulator market. Besides, competition matrix and market share analysis have been included under the competitive landscape to understand the top players’ contribution in the industrial gas regulator market. Each company is studied on the basis of basic information, financial highlights, revenue highlights of regional contribution and segment contribution, and product portfolio. Additionally, the company strategy and recent developments if any are also incorporated under each company profile section.