Ice cube is an efficient way of cooling a beverage instantly. Other than just cooling beverages, ice cubes have various other uses such as in removing gum from clothes and curing skin problems, among others. Over the years, ice trays have evolved from metal ice trays with a leaver to take out ice cubes, to soft plastic ice trays that are flexible enough to twist and take out ice cubes. Ice trays are one of the most readily available consumer products in general retail stores, super markets and hyper markets. Moreover, the online sales channel has played a crucial role in enabling consumers to find the desired shape of ice trays easily. The stackable nature of ice trays offers the added convenience of storing and transporting ice trays for consumers, manufacturers, and suppliers. The increasing demand for ice cubes as a traditional way of cooling and lowering down the concentration of beverages drives the global ice trays market.

One of the prominent advancements in the ice trays market is the development of BPA (Bisphenol A) free plastic ice trays. Majority of plastic molds contain BPA, which causes health issues such as behavioral changes, damage to pituitary gland and damage to the brain. To prevent the influence of plastic ice trays containing BPA on public health, silicone ice trays were introduced in the global ice trays market. Further, developments in plastic materials have resulted in the manufacturing of flexible or soft plastic ice trays wherein ice cubes can be easily removed from the tray by merely twisting it. Continuous advancements in material and manufacturing technology have resulted in ice trays that ate capable of forming ice cubes in an infinite number of complex shapes such as spherical balls. As the demand of customized or complex shaped ice trays is increasing, the online sales channel has created a highly interactive platform for consumers to easily find the desired ice tray and for manufacturers to market their creative designs in the ice trays market.

The global ice trays market can be segmented on the basis of the design of ice cubes as:

The global ice trays market can be segmented on the basis of the material type as:

The global ice trays market can be segmented on the basis of capacity as:

The global ice trays market can be segmented on the basis of sales channel as:

The global ice trays market can be segmented on the basis of geographical regions as: 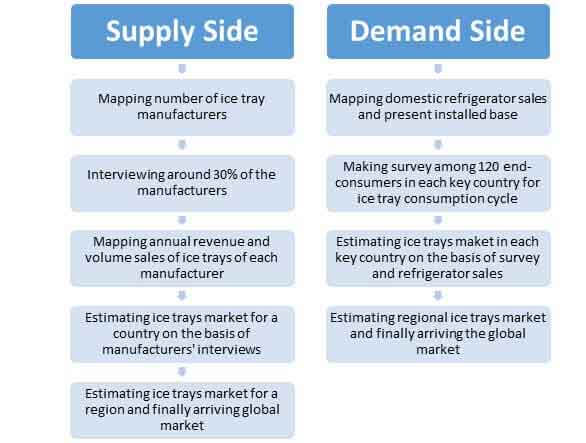 The global ice trays market players can be segmented into a three-level tier structure as:

Tier-1: Tier-1 players are characterized by premium ice trays with highly complex or customized designs and the high quality of material used in the manufacturing of ice trays. Also, these companies have strong presence on the online sales channel. Tier-1 ice tray market players include Onyx Containers, The Original Whiskey Ball, Fred & Friends LLC and some others.

Tier-3: Tier-3 players are characterized by moderate volume production of economic ice trays. These companies belong to the unorganized manufacturing sector, which is engaged in the manufacturing of a wide variety of plastic consumer products along with ice trays and serves the domestic market only.

The report is a compilation of first-hand information, qualitative and quantitative assessment by industry analysts, inputs from industry experts and industry participants across the value chain. The report provides in-depth analysis of parent market trends, macroeconomic indicators and governing factors along with market attractiveness as per segments. The report also maps the qualitative impact of various market factors on market segments and geographies.