Hydrogen peroxide is a basic type of peroxide, which is used as a strong bleaching and oxidizing agent. It is made by several manufacturing processes. However, the most widely used method is anthraquinone autoxidation. Hydrogen peroxide is utilized in several end-use sector for example, chemical, paper & pulp, wastewater treatment, mining, and electronics owing to its environment-friendly applications. Hydrogen peroxide, when inhaled, can cause irritation in the throat, nose, and respiratory tract. It can also lead to accumulation of fluid in the person’s lungs in extreme cases.

The enduring development in various end-use segments is relied upon to result in prominent extent of development in the global hydrogen peroxide market within the span of 2016 to 2024. In 2015, the opportunities in global hydrogen peroxide measurement remained at US$81.4 mn. Increasing at a CAGR of 5.70% during the period from 2016 and 2024, it is evaluated to worth US$133.3 mn by the end 2024. 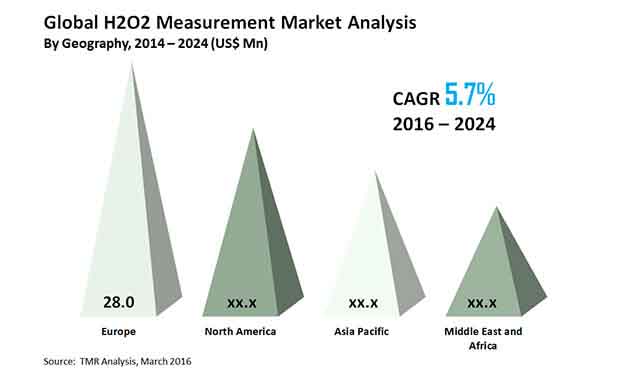 With the rising utilization of hydrogen peroxide (H2O2) in its vaporized structure for purification, explicitly in the healthcare segment, the demand for hydrogen peroxide measurement gadgets has been showing a striking flood since the most recent couple of years. As the remnants remains from hydrogen peroxide are simply oxygen and water, the popularity of these gadgets is seeing high development in medical clinics, pharmacies, and research centers, intensive care units (ICU).

Experts at TMR foresee that the popularity rate of hydrogen peroxide measurement gadgets will stay expanding over the coming years, impacting the market's development significantly. The developing accentuation on employees in healthcare industry and the rising awareness with respect to the significance of improved indoor air quality will likewise boost the demand for these gadgets in the span of forthcoming years.

Hydrogen peroxide measurement discovers the greater part of its application in food and beverages, chemicals, laboratories, pharmaceuticals, healthcare, HAC systems, freeze dryer, and animal farming among which the healthcare segment has developed as the main end-use industry.

Europe, Asia Pacific, Latin America, North America, and the Middle East and Africa are the primary regions markets for hydrogen peroxide measurement gadgets. Europe drove the global market in 2015 with an offer of almost 34%. An entrenched and propelled medical framework helped the mentioned region to obtain the main position.

Furthermore, the emergence of a huge pool of market players is probably going to help the region in keeping up its initiative over the prospective years. The expanding selection of HPV purification in drug stores, healthcare, and labs is likewise expected to support the closeout of these gadgets in Europe soon.