The global market for humic acid, which is rated highly among the most chemically active compound and contains essential phytochemical groups that are highly useful for various applications in agriculture and dietary supplements, is driven by a number of factors, and is projected for a strong CAGR 12.1% during the forecast period of 2016 to 2024, according to the report by Transparency Market Research (TMR). Some of the key factors augmenting the demand in the global humic acid market are growing demand for organic foods and rising concerns regarding the use of chemical fertilizers that cause substantial damage to the arable land, to the environment, and health of living things. On the other hand, inconsistency in quality of commercially available humic acid is somewhat hindering the prosperity of this market.

As per the evaluations of the TMR report, the global market for humic acid was worth merely US$387.1 mn in 2015, but the valuation will breach the billion market soon in the near future, estimated to be US$1.04 bn by the end of 2024. The vendors of this market will continue to gain from high growth potential of humic acid in the emerging economies, especially in Asia Pacific, which resides nearly the half of the world’s population. 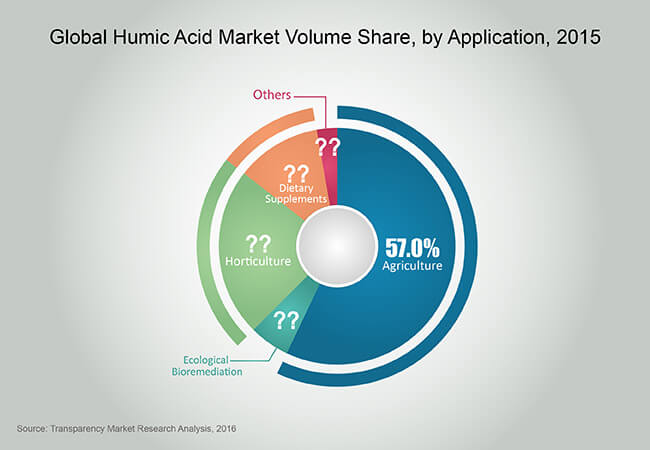 Application-wise, the global humic acid market has been segmented into ecological bioremediation, agriculture, horticulture, dietary supplements, and drilling fluids. Among these, the agriculture sector accounted for more than half of the demand for humic acid in 2015, and is expected to remain the most lucrative application segment throughout the forecast period. Growing trend of organic farming for their apparent health benefits, growing awareness regarding the benefits of humic acid in developing countries, and government initiatives and subsidies to promote the use of ecologically favorable products are some of the factors augmenting the demand in the global humic acid market.

On the other hand, the horticulture and dietary supplement segments are also anticipated to increment the demand at a significant rate during the forecast period. The healthy-living trend among the urban population is helping the dietary supplement segment, as the mineral-rich organic foods produced with the help of humic acid add to the human immune system and detoxifies it.

Geographically, the report takes stock of the potential of the humic acid market in the regions of North America including the U.S., Europe including the U.K, France, Spain, and Germany, Asia Pacific, Latin America, and The Middle East and Africa (MEA). In 2015, North America was the most profitable region, serving nearly 40% of the global demand for humic acid, and is expected to remain the most lucrative region throughout the forecast period. Easy availability of raw materials, high percentage of disposable income among the citizens, growing awareness regarding the benefits of organic foods, and technological advancements in the production of humic acid are some of the key factors reflecting positively on North America humic acid market. While Europe remains the second most profitable region, vendors of this market are also venturing into the emerging economies in Asia Pacific such as India, China, Japan, and South Korea to expand their horizons.

The rising demand for organic food is expected to drive development of the global humic acid market in the years to come. Humic material refers to an organic ingredient of humus/soil, peat, and coal. Humic acid is a key element of humic substance. It's also found in dystrophic lakes, salt water, and upland streams in the form of an organic constituent. It is made from the biodegradation of dead organic matter. It's a complicated combination of acids with carboxyl groups and phenolate groups.

Positive growth indicators in the agriculture, ecological bioremediation, horticulture, and dietary supplements industries were identified as the primary drivers of global humic acid market growth in the years to come. Humic acid is utilized in plants and human beings to boost immune systems, avoid soil depletion, nourish root systems, and avoid nitrogen leaching. Such extensive use is likely to augur well for the global humic acid market.

In the coming years, rising awareness of the product's health benefits would have an effect on the dietary supplement application market. The dietary supplement application comes with has a significant growth prospect the market is estimated to remain one of the lucrative applications for humic acid. It's become more common as a way to detoxify the body and boost the human immune system. The product's mineral-rich composition also aids in the treatment of illnesses such as common cold and pneumonia, which is likely to augur well for the global humic acid market in the forthcoming years.

Due to federal legislation prohibiting the utilization of chemical-based fertilizers attributable to their detrimental and toxic effects on the environment as well as human life is likely to bolster demand in the global humic acid market in near future. It has particularly gained importance in farming. The government has been working hard to raise farmer consciousness about the benefits of using organic-based fertilizers to improve total crop yield by improving soil fertility.

Besides that, the utilization of humic acid is likely to raise the nutritive value of the products, which is estimated to increase demand for humic acid in the future. There are many advantages of humic acid for its protracted utilization in agriculture, as well as the major negative effects of chemical fertilizers, are likely to bode well for the global humic acid market in the near future.