Stiff competition and fragmentation prevail in the global food hydrocolloids market. In this market with a large number of local and regional players, key players have resorted to product innovation, investments, and acquisitions to gain competitive advantage.

The food industry has been displaying a surging demand for food hydrocolloids predominantly on account of its functional properties. The increasing uptake of ready-to-eat meals is the key factor having a positive impact on the food hydrocolloids market. In present times, the increasing complexity in consumer dynamics due to professional and personal commitments does not leave adequate time for fresh cooking on a regular basis. This, in turn, is displaying an increased demand for ingredients used in food products such as hydrocolloids. 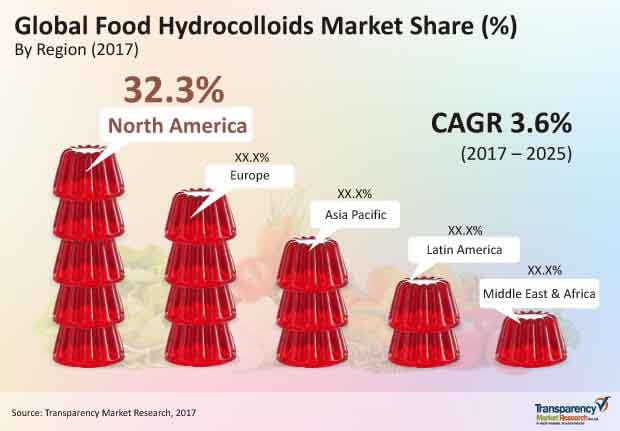 Proving a roadblock to the growth of the food hydrocolloids market is the use of conventional ingredients from the regional food industry.

The segments into which the global food hydrocolloids market is classified based on source type are plant source, microbial source, seaweed source, animal, and synthetic. Amongst all, the segment of plant source is expected to hold 37.4% of the overall market by the end of 2017.

In terms of function, the segments of the global food hydrocolloids market include thickener, stabilizer, emulsifier, gelling, coating, and others. Thickener, amongst all, is expected to lead the market over the forecast period.

The segments of the global food hydrocolloids market based on application that are covered in this report are bakery and confectionery, meat & poultry, sauces & dressings, beverages, dairy products, and others. Amongst all, bakery and confectionery is anticipated to display the leading CAGR of 4.8% between 2017 and 2025. This will be followed by meat and poultry at a CAGR of 3.6% over the forecast period.

The key segments into which the global food hydrocolloids market is divided based upon geography are North America, Europe, Latin America, Asia Pacific excluding Japan, Oceania, Japan, and the Middle East and Africa.

North America presently holds supremacy in the global food hydrocolloids market. The regional market of North America is expected to expand at a CAGR of 4.0% between 2017 and 2025. Progressing at this pace, the region is expected to gain significantly vis-à-vis revenue by the end of 2025.

Asia Pacific is expected to display 3.6% CAGR between 2017 and 2025. The increased concentration of product manufacturers in the developing countries of Asia Pacific accounts as one of the key factors for the growth of this region. The rising working class population in the region that is increasingly adopting convenience foods to match their busy lifestyle is displaying demand for functional ingredients that are used in these foods. Thus, the market for food hydrocolloids is benefitted.

Latin America and the Middle East and Africa are expected to trail Europe with respect to growth rate over the forecast period.

Food hydrocolloids refer to various food additives utilized in the food processing method to increase shelf life and better its quality. Hydrocolloids are made of finely divided particles that are dispersed in water and these are colloidal in nature. They exist in two different forms, such as gels/sols but it depends on the quantity of the water in which particles are spread and they come out in just one single form. Rising use of these products in the food and beverage sector are likely to foster development of the global food hydrocolloids market in the forthcoming years.

Food and beverage sector is one of the leading end users of hydrocolloids, thanks to their ability to alter rheology of the system they have been added to. In addition to that, food hydrocolloids act as important ingredients in the food and beverage sector. Some important uses of the additive comprise gelling agents, thickening agents, emulsifying agents, and many others. These hydrocolloids are extracted from microbial, animals, and plants in the nature. They can be easily synthesized through a chemical reaction, and then used for a wide range of applications. As such, food hydrocolloids come with both chemical and natural sources. Riding on the back of its rising demand, the global food hydrocolloids market is expected to register considerable growth over the timeframe of analysis.

There has been a rising demand for healthy food items, which plays an important role in bolstering the expansion of the food and beverage sector. With the flourishing business of this industry, it is expected that new growth opportunities are likely to emerge for the global food hydrocolloids market in the near future. Consumers are now more than willing to spend extra on food items that are healthy, which is likely to augur well for the global food hydrocolloids market.

In order to provide users of this report with comprehensive view of the market, we have included detailed competitiveness analysis, market key players, their key developments, swot analysis and strategy overview. The dashboard provides detailed comparison of food hydrocolloid manufacturers on parameters such as types of hydrocolloids offered by these. The study encompasses market attractiveness analysis by source, type, application, country, function etc.

Market numbers have been estimated based on data available from food hydrocolloids manufacturer website, press releases, and extensive secondary and primary research and the revenue is derived through regional pricing trends. Market size and forecast for each segment have been provided in the context of global and regional markets. The food hydrocolloids market has been analyzed based on expected demand. Prices considered for the calculation of revenue are average regional prices obtained through primary quotes from numerous regional food hydrocolloid manufacturers, retailers and distributors. All key end users have been considered and potential applications have been estimated on the basis of secondary sources and feedback from primary respondents.

Country demand patterns have been considered while estimating the market for various end users of hydrocolloids in the different regions. Top-down approach has been used to estimate the food hydrocolloid market by region. Company-level market share has been derived on the basis of revenues reported by key service providers. The market has been forecast based on constant currency rates. A number of primary and secondary sources were consulted during the course of the study. Secondary sources include Factiva, and Hoover’s, and company annual reports, its press releases, news reports and publications.

The market has been segmented as below: