The global digital isolator market is prophesied to win traction over the optocouplers market owing to advantages such as improved accuracy and performance and increasing preference in the industrial sector. Digital isolator offers better power efficiency, more reliability, and less expensiveness. For industrial applications, it could prove to be a vital means of receiving efficient and low-cost solutions for equipment safety and data transfer compared to optocouplers.

New isolators with wide packages and top-quality mold compound could be highly demanded in industries that deal with rough weather conditions. Furthermore, the rising application of renewable energy sources is giving way for wind, hydel, and solar energy industries, which could in turn benefit the global digital isolator market. 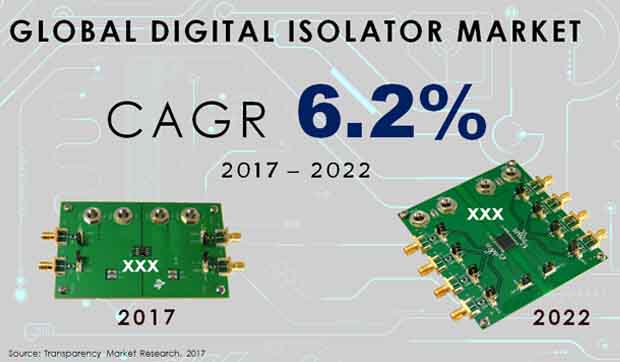 In terms of data rate, the world digital isolator market is envisaged to see a segmentation into less than 25 mbps, 25 mbps to 75 mbps, and more than 75 mbps. By channel, there could be segments such as 2 channel, 4 channel, 6 channel, 8 channel, and others. On the basis of vertical, the market is projected to be cataloged into industrial, healthcare, automotive, telecommunication, aerospace and defense, energy and power, and other verticals.

Geographically, the international digital isolator market is forecast to include attractive regions such as Asia Pacific Excluding Japan (APEJ), which could dominate with an absolute revenue opportunity of US$125.8 mn during the tenure of the forecast timeframe. North America and Europe are foreseen to encourage players with some powerful business prospects birthed via their success in the market. North America could rise at a CAGR of 6.8% while Europe is envisioned to reach a valuation of US$360.2 mn by the end of 2022.

Japan and the Middle East and Africa (MEA) could be among the lethargically growing regions of the international digital isolator market. Between 2017 and 2022, Japan is foretold to produce an absolute revenue prospect of only US$18.9 mn. The MEA accounted for a mere 2.4% of the total revenue share in 2017 and could lose 5 basis points (BPS) in its market share by 2022 over 2017.

The global digital isolator market is envisaged to gain a steadfast momentum on the back of the mounting need for industrial automation. The improvement of manufacturing and production facilities could be a result of the growing trend of adapting to the requirements of customers and rising inter-industry competition. The increasing focus on automation processes, which are more effective and efficient compared to manual labor, could bode well for the market. Industrial automation helps to boost flexibility, reduce employee wages, and decrease reliance on labor.

The report presented herewith is a detailed assessment of some of the critical growth factors, trends, and opportunities of the global digital isolator market. The segmentation study provided in the report is expected to assist players in determining crucial areas of growth and business prospects.

The world digital isolator market is envisioned to testify the growth of a latest trend which marks a rising usage in higher altitude applications. Digital isolators require advanced technology to appropriately function in high-moisture and polluted environments and of course, high altitudes. The growth of the market could be significantly uplifted with the growing acceptance of advantages offered by technologies such as capacitive digital isolator. The highly competitive nature of the market could boost revenue shares as companies look to execute newer strategies and expand their product portfolio.

The international digital isolator market is anticipated to be segregated according to four categories, i.e. isolation, data rate, channel, and vertical. On the basis of isolation, the market could include giant magnetoresistive as a larger segment. In 2017, this segment accounted for a US$430.5 mn of the total revenue of the market. During the forecast period 2017-2022, it could expand at a 7.1% CAGR. Capacitive coupling and magnetic coupling could be the other two types of isolation.

By data rate, the international digital isolator market is prognosticated to be classified into less than 25 mbps, 25 mbps to 75 mbps, and more than 75 mbps. As per the segmentation by channel, there could be important segments such as 2 channel, 4 channel, 6 channel, 8 channel, and others. By vertical, the market could create prospects via segments such as industrial, healthcare, automotive, telecommunication, aerospace and defense, energy and power, and other verticals.

According to regional segmentation, the international digital isolator market is predicted to witness the dominance of Asia Pacific Excluding Japan (APEJ) expected to exhibit all through the course of the forecast period. It could rise a 6.4% CAGR. As is with most markets, the Middle East and Africa (MEA) and Japan are projected to showcase a sluggish growth in the coming years. However, North America and Europe could balance the market growth with their attractive share. The market is also forecast to be contributed by Latin America.