Technology used by nations for safeguarding their public and preventing any terror attacks is referred to as counter terror & public safety technology. These technologies help in detecting, tracking, and tackling any threat that could harm a nation’s economy and its people. Various counter terror & public safety technology have been developed across the globe, which include cyber security, electronic fencing, biometrics, intelligence services, video analytics, video surveillance, weapon detection systems, intrusion detection, and counter IED technologies. 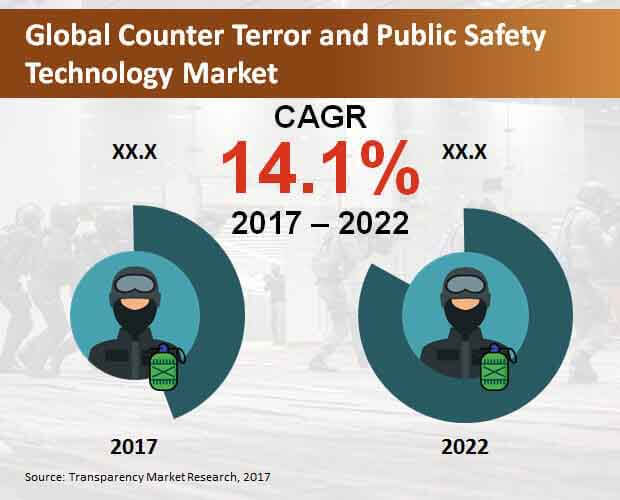 Seemingly identical to versions of various brand names, counterfeit electronics are being slipped periodically into technology orders made by the federal government. In addition, blueprints of various equipment ranging from IEDs – improvised explosive devices, to nuclear weapons are easily found online. All the aforementioned facts illustrate the nuanced & complex threats faced by the global environment currently, which has necessitated developments in technologies for detecting and preventing them.

Employing Counter-Intelligence-Driven Mindset to be Imperative for Governments

The current world’s threat environment has led toward demand for increased collaboration, along with the essentiality of shared situational awareness among all levels of government authorities. Technology holds potential in transforming data gathered regarding these threats into actionable intelligence by proper sorting and analysis. It is imperative for governments to employ a counter-intelligence-driven mindset for integrating analysis, investigations, and technology into a holistic & coherent system that will enable resolving challenges related to public and nation’s threats. Leading technology giants across the globe are focusing on making developments in technology for counter terror & public safety, in a bid to provide the global population with a safe environment to thrive.

Projected to expand at the highest CAGR through 2022, North America will continue to be the most attractive market for counter terror & public safety, followed by Europe. The market in Asia-Pacific excluding Japan (APEJ) has been projected to register a comparatively faster expansion than in Europe through 2022. However, revenues from APEJ’s market will remain lower than those from Europe’s. Middle East and Africa is expected to account for the smallest revenue share of the global counter terror & public safety technology market during 2017 to 2022.

The report comprises important factors accelerating the market expansion, trends & developments molding dynamics of the market, and potential untapped opportunities for leading market participants. The report provides a scrutinized analysis on the market sizing related to various segments during the historical period, 2012 to 2016. Analytical tools have been used by TMR’s analysts for reaching at the most significant & relevant future market projections for the forecast period.

The commencing chapter of global counter terror & public safety technology market report provides an executive summary, followed by a brief market introduction, and formal definition of “counter terror & public safety technology”. The executive summary offered is exhaustive yet concise, and delivers all necessary information pertaining to the market in a format, which is easy to understand. Estimations on the market size provided in the report have been interpreted via metrics including year-on-year expansion rates, compound annual growth rates, basis point share indexes, and absolute dollar opportunities.

The report also gives information associated with the distribution network, and technology roadmap, along with an intensity map, which pin-points presence of the market players around the world. The report also delivers insightful analysis about counter terror & public safety technology market’s competitive backdrop at a global scale. The market participants profiled by the report are analyzed based on their key developments, strategic partnerships, and current market scenario.

A weighted chapter is given in the report, which provides insights on the competitive landscape of global counter terror & public safety technology market, along with a scrutinized analysis on the key market players. Information on key players contributing to the market expansion is delivered in terms of product overview, key financials, SWOT analysis, company overview, and key developments done by these players. Knowledge about novel strategies adopted by the market players is also provided in this chapter, which helps in increasing their portfolios. These players are entering into M&A as expansion strategies, marketing strategies, and strategic alliances. The report also tracks major developments by prominent industries, coupled with their influence on the product demand.

The report has provided insights about global counter terror & public safety technology market on the basis of a segmentation analysis. The report has segmented the market based on technology type, end-user, and region. On the basis of region, the market is segmented into Latin America, North America, Europe, APEJ, Japan, and MEA. The global counter terror & public safety technology market’s taxonomy has been elaborated exhaustively with the help of a taxonomy table, which is given below.