According to Transparency Market Research’s latest research report on the global commercial avionics systems market for the historical period 2017, base year 2018, and the forecast period 2019-2027, growing demand for systems that can calculate real time data for the aviation industry is likely to fuel the global commercial avionics systems market during the forecast period

In terms of revenue, the global commercial avionics systems market is estimated to reach value of US$ 34.44 Mn by 2027, expanding at a CAGR of 3.5% throughout the forecast period 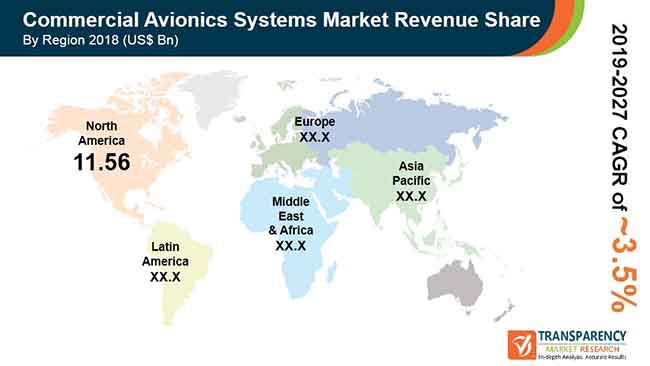 Growing Demand for Systems that can Calculate Real Time Data: A Key Driver

Rapid evolution of the aviation industry, especially in developed economies such as North America and Europe is setting the trend for the growth of the commercial avionics systems

Unwillingness of the market players to participate in larger activities owing to high system maintenance costs is restricting the growth of the global market for commercial avionics systems.

Furthermore, aviation vehicles have become more vulnerable to online hacks due to the usage of modern commercial avionics system

Detailed profiles of providers of commercial avionics systems have been provided in the report to evaluate their financials, key product offerings, recent developments, and strategies

Stuck in a neck-to-neck competition with other brands? Request a custom report on Commercial Avionics Systems Market

In September 2018, Panasonic Avionics Corporation have strategically collaborated with Inmarsat, for a period of 10 years. This coordinated effort will empower carriers, airplane makers and travelers to profit by the joined ability of two organizations that have been at the bleeding edge of innovation and advancement for about four decades. This collaboration will offer inflight connectivity combine with high value solutions and services to the customers in aviation industry globally

The role of commercial avionics systems is continuously growing in the aviation industry. Avionics systems include all the systems incorporated in the aircraft cockpit, such as navigation, surveillance, control, maintenance, monitoring, display, communication, electrical, guidance, and anti-collision systems. The effective operation of these systems collectively, improves the overall performance of the aircraft. The market for commercial avionics systems is expected to experience a positive shift during the forecast period from 2019 to 2027 due to increasing investments, emergence of new players in the market and adoption of advanced technology to develop more effective avionics systems.

On the basis of geographical regions, the commercial avionics systems market is categorized into North America, Europe, Asia-Pacific (APAC), and Rest of the World. In 2018, North America accounted for the largest market share of the market, followed by Europe, Asia Pacific, and the Rest of the World. Asia Pacific region is expected to grow rapidly with rising trade with Europe and North America. Regional companies concentrate on merging with organizations in areas such as the Middle East and Africa.

The segments covered in the Commercial Avionics Systems market are as follows:

The segments covered in the Commercial Avionics Systems market are as follows: