With leading oil and gas companies operating in the region, North America emerged as the largest region in the global clear brine fluids market. As developed nations are motivated to gain energy security, the oil and drilling activities in the region are increasing rapidly. To maintain their position in the market and not be dependent on OPEC for energy sources, the countries in North America have increased their drilling activities to discover more shale reserves. North America accounted for 65.7% in terms of volume of the global clear brine fluids market in 2014 and is expected to hold a share of 64.8% by 2023. 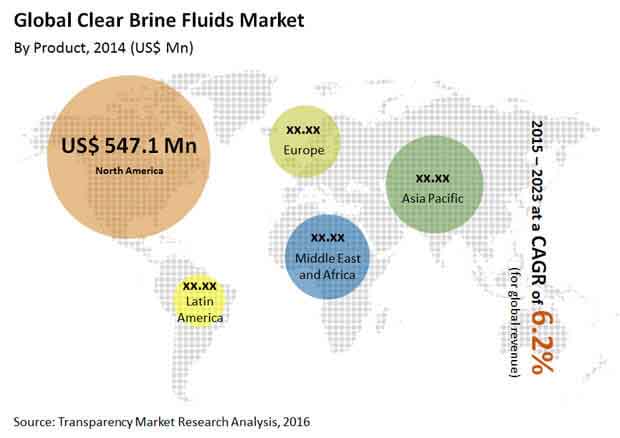 Potassium chloride brine fluids are used for stabilizing water sensitive clays during the extraction completion process. It helps in controlling the formation damage and pressure in reservoirs during the extraction process, thus making it the most used clear brine fluid among various end-use industries. The global potassium chloride brine fluids segment is projected to expand at a CAGR of 6.5% in terms of revenue between 2015 and 2023.

The report comprises in-depth analysis and forecast of the clear brine fluids market on a global as well as regional level. The report includes forecast for the period from 2015 to 2023 in terms of volume (kilo tons) and revenue (US$ Mn). Quantitative data has been derived through extensive secondary research of the global clear brine fluids market. Secondary sources typically include company websites, relevant magazines, government documents, and press releases. The top-down approach has been adopted to derive the regional numbers from global revenue and volume figures. Furthermore, the bottom-up approach has been employed to derive data for various product segments based on demand for clear brine fluids in each geographic segment. A combination of top-down and bottom-up approaches helps in validation of the quantitative data of the market. The data was further validated with the help of primary research with industry experts to ensure accuracy of derived numbers.

Detailed analysis of various factors driving the global clear brine fluids market has been included for astute decision making. Impact of these drivers during the forecast period has been included with data to substantiate research findings. Furthermore, factors restraining market growth have been included for better understanding of the market. Impact of these restraints has been analyzed over the forecast period. The report also comprises various opportunities available for market growth over the next eight years. Opportunities entail untapped or recently explored factors that are anticipated to drive the clear brine fluids market during the forecast period.

The report includes value chain analysis to help understand the industry thoroughly. Value chain analysis comprises detailed evaluation of the roles of various entities involved in the clear brine fluids industry, from raw material suppliers to end-users. Various processes employed in the manufacture of clear brine fluids have been included in the value chain analysis. Porter’s Five Forces model has been employed to determine the degree of competition in the market during the forecast period. Company market share analysis has been included for better understanding of the competitive landscape. Company market share analysis includes the market share of dominant players in 2014, based on their production capacities. Furthermore, market attractiveness analysis has been conducted to analyze product segments that are expected to be lucrative during the forecast period. This is based on various factors such as market size, growth rate, profitability, raw material procurement, and competition in each product segment.

Based on product type, the clear brine fluids market has been segmented into potassium chloride, calcium chloride, sodium chloride, calcium bromide, potassium bromide, sodium bromide and others (including zinc bromide and ammonium chloride). The report comprises detailed analysis of all the segments in the regional and global markets and forecast based on current and future trends in the industry in terms of volume (kilo tons) and revenue (US$ Mn). In terms of region, the market has been segmented into North America, Europe, Asia Pacific, Latin America, and Middle East & Africa. Demand for clear brine fluids in each of its application segment has been analyzed and forecast for a period of eight years.

The report also comprises profiles of leading companies in the clear brine fluids market. These include Israel Chemicals Ltd., Albemarle Corporation, TETRA Technologies, Inc., and Great Lake Solutions. Various attributes of these companies such as company overview, business strategies, and recent developments form the core of the company profiles section.