The global chlorine market is foreseen to draw a handsome growth owing to well-paid applications such as ethylene dichloride (EDC)/polyvinyl chloride (PVC), aromatics, propylene oxide, isocyanates, and chlorinated intermediaries. Prophesied to account for a higher consumption of chlorine, EDC/PVC could be highly demanded in the prospering construction sector. Asia Pacific is foretold to be a choice market for capacity expansion, taking in view the rising demands from the booming chemicals sector and plastics industry. Increasing residential requirements in India and China could script the growth of business prospects in the market. 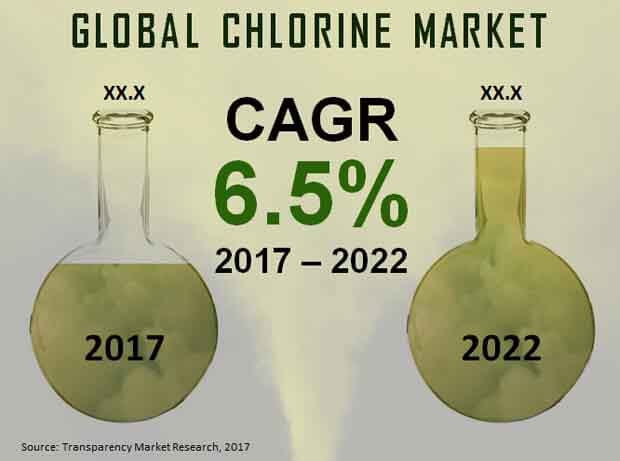 The world chlorine market is prognosticated to see a classification into vinyls, organic chemicals, water treatment, and chlorinated intermediates, as per the segmentation by end use. By the end of the forecast period, vinyls could account for a king’s share in the market while earning a revenue of US$19.5 bn. On an annual basis, this end-use segment is estimated to expand at a US$1.0 bn between 2017 and 2022. The absolute growth garnered by the segment could be greater than any other in the same segmentation class. The dominance of vinyls in the market could be witnessed throughout the course of the forecast period.

A proper study of various segmentations of the world chlorine market is envisioned to play an important role in the advancement of players in the foreseeable future. Buyers of the report could be able to understand the growth of each critical segment in advance and accordingly prepare their strategies for future progress in the market.

On the basis of regional segmentation, the international chlorine market is anticipated to award Asia Pacific except Japan (APEJ) for its matchless revenue growth in the coming years. By 2022 end, the region could rake in a US$23.0 bn. It is envisaged to be one of the most lucrative regions for the market. The dominance of APEJ could continue to take shape even until the final forecast year.

Next on the list of most attractive markets for chlorine could be North America with a US$7.4 bn approximated to be earned by 2022. Japan is projected to expand at a CAGR of 6.1%, which could be close to that of North America. With an absolute revenue prospect of US$1.2 bn expected to be achieved during the forecast timeframe, Europe could be another region to look out for favorable opportunities. However, the Middle East and Africa (MEA) is forecasted to showcase a sluggish growth in the near future.

In this report, the authors provide an in-depth preparation of market analysis including crucial inputs from industry experts. Readers could be able to gauge the nature of the market landscape and its progress in the next few years. Using data summation from multiple sources, synthesis, and study, the report offers a thorough picture of the global chlorine market.

Medical drugs that contain chlorine as an ingredient are prescribed for treating a number of diseases and conditions. These could include inflammation, epilepsy, asthma, high blood pressure, anemia, depression, stomach ulcers, diabetes, cancer, and high cholesterol. For an estimated 25.0% of medicines, chlorine could be engaged in the last step of drug formulation. Besides this, chlorine could act out a supporting role in the synthesis of drugs.

The international chlorine market is forecasted to be classified into four critical segments, i.e. vinyls, organic chemicals, water treatment, and chlorinated intermediates. According to the expert analysis of the market researchers, vinyls could bag a larger share by the end of 2022. This segment secured a share of 48.8% in 2017.

By geography, the international chlorine market is predicted to witness the attainment of the first position in terms of share by Asia Pacific except Japan (APEJ). The domination of APEJ could continue to prevail throughout the course of the forecast timeframe 2017–2022. North America and Japan are anticipated to be among the other attractive markets for chlorine, whereas the Middle East and Africa (MEA) could grow at a slow pace. Latin America and Europe are also expected to join the race.