The packaging industry is becoming an integral part of a wide range of end-use industries. The increasing demand for see-through packaging solutions is triggering the demand for high-performance barrier materials, such as cast films. The demand for high-quality cast films is increasing, as the packaging industry is regulated by various governing bodies as well as environmental organizations, which has amplified the importance of optical properties and quality of the raw materials of cast films.

The cast films landscape is expanding into new industrial verticals, as market players are foraying into versatile areas of applications to improve the sales potential of cast films. Pharmaceuticals and personal care industries are emerging as top new application areas for cast films market players, and this is triggering innovation in the landscape, as manufacturers are focusing on meeting the specific requirements of end users in these industries.

Right from innovation in engineered plastic, which is the primary raw material in cast films, to unique features of cast film-based packaging solutions, such as anti-counterfeiting cast film labels for pharmaceuticals, the cast films landscape is attracting investors. Transparency Market Research (TMR) thoroughly studies the market, in its latest offering, and offers exclusive and actionable insights for market players to gain an edge in this landscape. 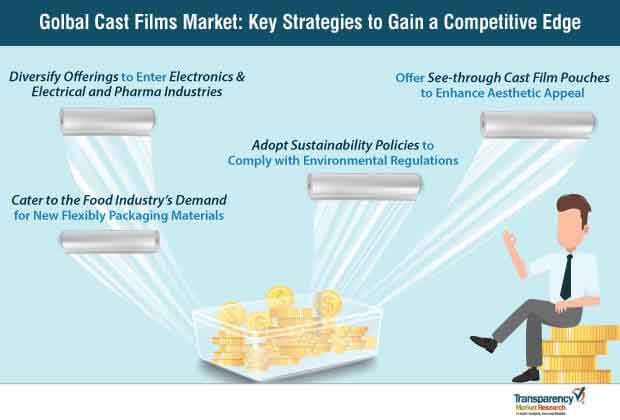 The cast films market grew at a healthy CAGR (Compound Annual Growth Rate) during 2014-2018, reaching a valuation of ~ US$ 60.2 billion in 2018. With their performance benefits over blown films, the demand for cast films is expected to prevail in the coming years. Market players are now competing on the distinguished performance characteristics of cast films by adopting high-performance raw materials.

In addition, sustainability is becoming an important aspect for manufacturers in the cast films landscape, as end users are willing to reduce the carbon footprint of their businesses, and consumers are becoming more aware about the recyclability of plastic-based packaging materials. However, owing to the complexity of packaging formats of cast film-derived packaging solutions, recycling multilayer cast film packaging on a commercial scale is becoming a critical challenge for stakeholders in the cast films market.

The global market for flexible packaging solutions is expanding rapidly, and most of the stakeholders’ actions are determined by consumer product purchasing behavior. The cast films landscape is taking shape based on the same phenomenon, as dynamic factors influencing consumer purchasing decisions are redefining the trends in this market.

Consumers are gradually switching to smaller serving sizes, especially when it comes to food products or beverages, and the demand for lightweight packaging is increasing. With a mounting number of consumers voicing their demand for compact and convenience packaging in products, the applications of cast films in manufacturing compact packaging such as pouches are likely to surge in the coming years.

TMR’s study finds that, in 2018, pouches accounted for ~ 41% revenue share of the cast films landscape, recording a sales of ~13,463 kilo tons. Market players are likely to increase focus on tracking consumers’ changing purchasing patterns to offer more appropriate features of cast films for pouches, and ultimately, to further enhance their sales performance.

Consumer inclination towards transparency while purchasing products, especially food items and personal care products, will have a paramount impact on the emerging trends in the packaging industry, ergo in the cast films market. With the imposition of labeling regulations and growing awareness about the 'clean label' movement, the demand for cast films in see-through packaging solutions, including pouches, is expected to reach new heights. 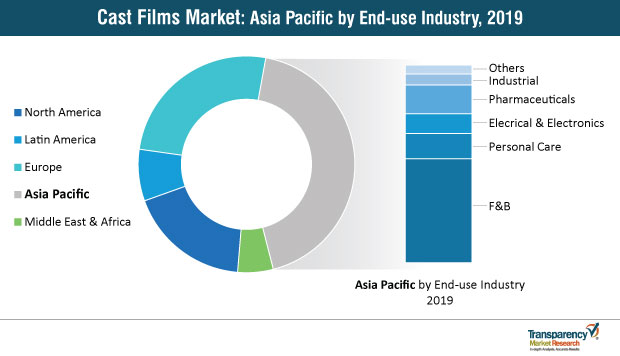 The packaging industry is witnessing burgeoning growth, worldwide. However, the business climate is far more favorable for cast film manufacturers in Asia Pacific. The increasing demand for cast film in packaging solutions in developing countries in Asia Pacific is mainly attributed to the increasing growth of the industrial landscape in this region.

Cast films worth ~ US$ 27 billion were sold in countries in Asia Pacific, including China, India, Japan, Australia & New Zealand, and ASEAN countries, in 2018, accounting for two-fifth revenue share of the global market. With ongoing developments in Asia Pacific’s industrial landscape, cast film manufacturers are adopting new strategies to sync with the evolving needs of the packaging industry in the region.

The adoption of next generation technologies to boost manufacturing efficiencies and production capabilities is expected to emerge as a winning strategy for manufacturers in Asia Pacific. Stakeholders are likely to expand their manufacturing facilities in the region to cater to the burgeoning domestic demand triggered by rising industrial growth.

In addition, the adoption of innovative and high-performance raw materials, including engineered plastics, will remain instrumental for businesses to gain momentum in Asia Pacific’s cast films market. The intensifying competitive landscape will trigger market players to invest heavily in research & development (R&D) to offer high-quality packaging solutions with improved performance of cast films.

The global market for cast films is witnessing healthy growth, with a significant upsurge in demand across the ever-expanding packaging industry. Though leading companies have a stronghold in this competitive landscape with their global reach and worldwide network of distributors, small companies are capturing local markets for cast films by virtue of introducing products at competitive prices.

Asia Pacific is home to a mounting number of start-ups and small businesses making a move towards up-scaling their position in the global market for cast films. Though new entrants and emerging players do not compete with the frontrunners in the cast films landscape, they are expanding their production capabilities in Asia Pacific to strengthen their foothold in the cast films market.

Companies such as Jindal Poly Films Limited and Polyplex Corporation have recently announced that they will be expanding their base in developing Asian countries such as India and Indonesia. Meanwhile, leading companies are adopting inorganic growth strategies in order to maintain an edge in the cast films market, by joining forces with other prominent players in this landscape. In addition, frontrunners are also focusing on their sustainability policies to comply with stringent regulations and create a strong brand image to boost their sales performance in this landscape. 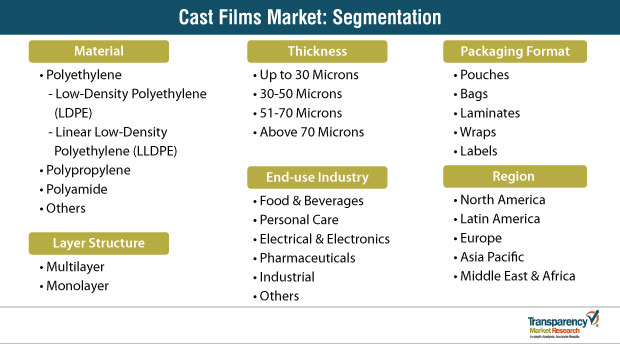 Authors of TMR’s study on the cast films market are of the opinion that, increasing growth of the packaging industry will continue to induce the demand for cast films in the coming years, and the market is set to grow 1.5X between 2019 and 2027. The food & beverage industry will boost sales, as consumers are inclined towards purchasing products with transparent and label-friendly packaging. Pharmaceuticals, personal care, and electrical & electronics industries will also create new avenues of growth for cast film manufacturers.

Market players who will introduce innovative features of cast film packaging solutions to meet the application-specific demand of end users will witness exponential growth in this landscape. Furthermore, adopting new manufacturing strategies to conform to environmental regulations imposed on the packaging industry will become inevitable for manufacturers in order to gain momentum in the market.

A new market study on the cast films market was recently published by Transparency Market Research (TMR), which provides a complete analysis on how the market will grow between 2019 and 2027. The study covers all the growth indicators as well as growth prospects of the cast films market in terms of value (US$ million).

Information featured in the study unveils important statistics and data about the demand for cast films across various industrial verticals. This has helped the authors of this study to reach the precise estimates on the valuation of the cast films market.

The research methodology followed by analysts for the production of TMR’s report on the cast films market includes two main stages – primary research and secondary research.

Primary resources that have contributed to the production of this study include discussions with key opinion leaders, enterprise size expert inputs, response analysis, and data triangulation. Interviews were conducted by analysts with brand managers of market players in the supply chain of the cast films market, and their respective c-level executives.

TMR’s study on the cast films market divides information into six important segments---material, thickness, packaging format, layer structure, end-use industry, and region. The study can help readers understand how growth of the cast films market is influenced by the market dynamics, including the emerging trends based on these segments.