An incubator is an equipment utilized for maintaining biological samples such as cell lines or microbial cultures in optimum environment and temperatures. Carbon dioxide incubators fall under major types of incubators, used for offering a stable environment for growth of cell cultures by controlling humidity, temperature, and O2 & CO2 concentrations at an ideal level inside the chamber. Major application areas of carbon dioxide incubators include laboratory research and clinical applications, and in vitro fertilization. 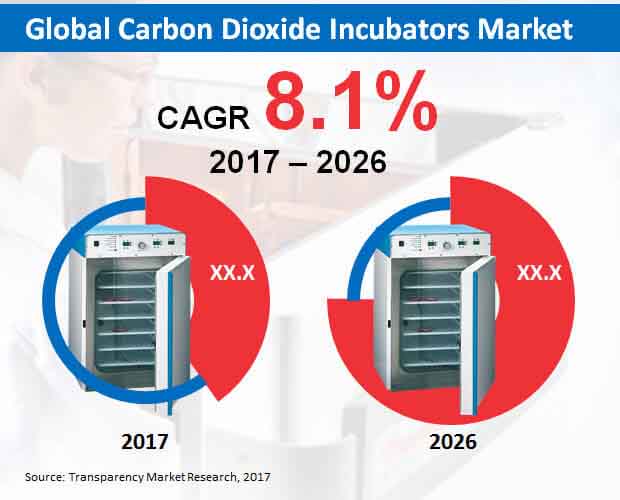 Asia-Pacific excluding Japan (APEJ) will continue to be the fastest expanding market for carbon dioxide incubators. This robust expansion of the market in APEJ is primarily attributed to increasing number of research and development facilities in pharmaceutical and biomedical sectors. Several research facilities have been migrated to APEJ countries such as Singapore, India, and South Korea, thereby accelerating demand for incubators. In addition, growing prevalence of crop research in many APEJ countries is further expected to impact demand for carbon dioxide incubators in this region.

As various laboratories and clinics are witnessing a paradigm shift toward automation, demand for carbon dioxide incubators is expected to rise significantly in laboratory research & clinical applications. This application segment is expected to be the major contributor to growth of the market, in terms of revenues. However, revenues from in vitro fertilization application of carbon dioxide incubators are projected to increase at a comparatively higher CAGR than those from laboratory research & clinical application through 2026.

Transparency Market Research (TMR) has formulated a new report on the global carbon dioxide incubators market, and offers insights for the forecast period, 2017 to 2026. The report offers forecasts on global carbon dioxide incubators market, along with a detailed market study and important dynamics affecting the market expansion. Coupled with the provision of intelligence about latest trends, restricting factors, and driving factors for growth of the market, analysis on imperative data across different market parameters.

A meticulous research on the global carbon dioxide incubators market’s competition landscape is given in this report’s ending chapter, which incorporates information pertaining to prominent industries that are contributing considerably to the market growth. Occupancy of these market participants has been traced with an intensity map. In addition to emphasis on profiling key market participants rigorously, competition landscape chapter gives insights based on the SWOT analysis, which explicates strengths, weaknesses, opportunities, & threats for that particular market participant. Furthermore, information on product overview, company overview, key financials, and key developments by these market players is contained in this chapter.