The global blockchain technology market is developing at a rapid rate and is predicted to observe high growth in the coming few years. The increasing number of innovations and the rising awareness among consumers regarding the benefits of using blockchain technology to accelerate the growth of the market in the near future.

As per a new market research by Transparency Market Research, in 2015, the global market for blockchain technology was worth US$315.9 mn and the market is projected to reach a value of US$20 bn by the end of 2024. The market is predicted to register a whopping 58.90% CAGR between 2016 and 2024. 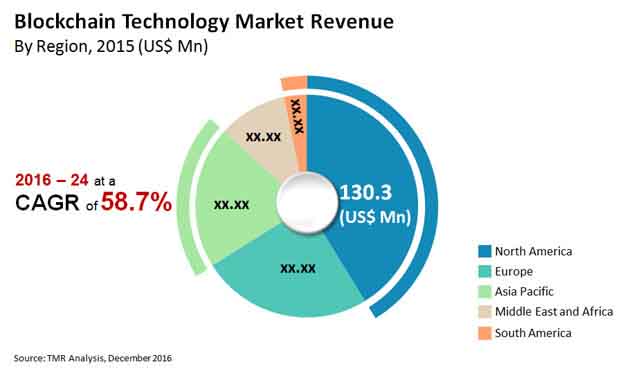 Among the regional segments, North America market for blockchain technology is growing at a healthy pace and is likely to hold a key share of the market in the near future. The strong growth of this region can be attributed to the increasing investments for the development of this technology in this field. In addition to this, the increasing contribution from the U.S. and the rising acceptance of new technology are estimated to support the growth of the North America market in the near future. Furthermore, Asia Pacific is predicted to exhibit a favorable growth rate in the near future, owing to the rapid economic development of India, China, and Japan. Moreover, the development of the financial sector in this region is another factor propelling the market growth.

The global market for Blockchain technology has witnessed a substantial rise in the last few years, owing to which the market is predicted to observe a healthy competition in the coming few years. The existence of well-known players operating in the market and the rising focus on the introduction of the new products are projected to support the growth of the market in the near future. In addition to this, the entry of new players and a significant rise in the number of strategic collaborations are projected to encourage market growth. Some of the key players operating in the blockchain technology market across the globe are R3, Digital Asset Holdings LLC, Ripple, IBM Corporation, Deloitte Touche Tohmatsu Limited, Microsoft Corporation, Chain Inc., and Consensus Systems (ConsenSys).

Blockchain technology offers a secure, fast, and cheaper medium of carrying out online transaction and online transfer of information without the need of third party verification. The adoption of blockchain technology in financial services sector has gained traction. Banking sector is willing to explore opportunities which would make the banking transactions more transparent and easy to process. Increased penetration of digital technology in the banking sector has resulted in the development of easy to use online platforms and applications. This drives the need to carry out the online transactions in a secure manner. Blockchain technology eliminates the frauds due to errors and identity theft to a large extent. Hence the financial services sector has been keen in exploring the technology before undertaking a wide scale deployment of this technology. This technology can benefit industries such as music and healthcare by offering easy access and exchange of digital data of these industries over the Internet.