Beacons are now widely used for customer engagement, such as in retail and marketing, featuring easy deployment, cost-effectiveness, and straightforward effectiveness.

Beacons are small, battery-powered wireless devices that transmit Bluetooth signals to smartphones in the proximity. Structurally, the beacon is incredibly simple comprising a CPU, batteries, and radio.

In terms of function, a beacon works by transmitting out an identifier picked by a device in the proximity, usually a mobile, and points out an important place in the environment. The identifier is a distinct ID number that the device recognizes as distinct to the beacon.

The one-way signals then interact with a mobile application installed on the device, and activates specific actions, such as location-based notifications. Interestingly, beacons and apps are a ‘power couple’. And, beacon devices are at the heart of beacon technology.

Put simply, iBeacon need apps to recognize their distinct identifiers and enable their associated communication. And, apps need beacons to be utilizable in the real world, to deliver the mobile experiences at the right place and at the right time.

When iBeacon technology combines with apps – it has the potential to create magic. iBeacon technology is utilizable for apps from different domains, for example Launch Here app. The ‘Launch Here’ app allows to automate tasks on mobile devices. Function-wise, if multiple beacons are placed around the home, on approaching a particular beacon, the Launch Here app triggers the relevant app associated with that beacon. For instance, if the beacon near the TV is approached, a TV remote app can launch. And, on approaching the fridge, it can activate a shopping list app. Hence, it can be said Launch Here is the fastest way to activate an app associated with a spot in indoor places such as home.

A beacon is a specific gadget intended to draw in attention towards a particular location. Beacons can likewise be integrated with semaphoric or different indicators to give critical data, for example, the status of an air terminal, by the rotational and color example of its air terminal beacon, or of pending climate as demonstrated on a climate beacon mounted at the highest point of a tall building or at comparative site. At the point when utilized in such a manner, beacons can be viewed as a type of optical telecommunication. 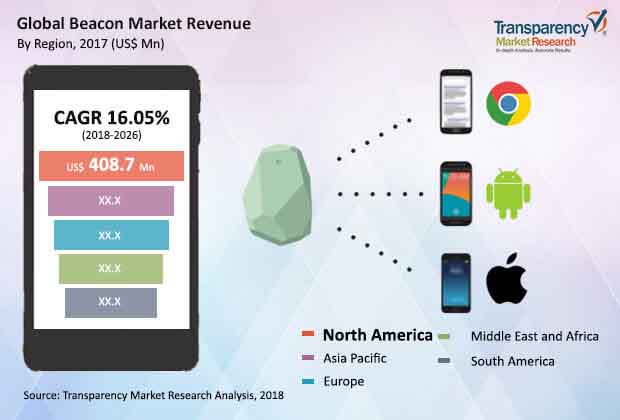 The global beacon market is divided by end-utilize sectors into advertising, retail, healthcare, transportation, manufacturing, and others. The retail segment is likely to contribute critical revenue to the market by the end of 2026 attributable to the expanded execution of beacon innovation in huge retail chains, for example, Meadowhall, Carrefour, Elle, Macy's, and Woolworths.

The global beacon market is foreseen to achieve US$4.9 bn by the end of 2026. The market is anticipated to flourish at a CAGR of 16.05% within the forecast period from 2018 to 2026. The global beacon market will keep on being affected by various factors such as, for example, increasing adoption and rising popularity of beacon innovation with the Internet of Things (IoT) and Industry 4.0.

The global beacon market is categorized on the basis of technology, end-use industry, component, and geography. Based on end-use industry, the market is segmented into retail, manufacturing, advertising, healthcare, transportation and logistics, and others including museums and sports industry. Of these, the retail segment is projected to have a major share during the forecast period. Benefits of using beacon technology are it helps in navigation, customized offers, getting reviews, and prompts that are expected to have a favorable impact on the market globally. Moreover, with its location and user priority based offers, the demand for beacon technology is highly used in the retail sector as users getting offers based on their previous track record purchases. Nevertheless, over the forecast tenure, the advertising industry is projected to rise at strong CAGR.

Based on technology, the market is segmented into Eddystone, iBeacon, and others. Over the course of eight years, the Eddystone technology is projected to grow at a healthy CAGR as the number of Android users are growing at a high rate. On the basis of component, the global beacon market is bifurcated into hardware and software. Out of these two, software component is projected to grow significantly during the forecast period.

Increasing Penetration of Smartphones to Boost Market in Asia Pacific

Geographically, North America is expected to hold a significant share in the market during the forecast tenure. The growth of this region is attributed to incidence of well-established players such as Gimbal, Estimote Inc., and Radius Networks in the region, mainly in Canada and the U.S. Moreover, North America is observing higher adoption of beacon due to continuous efforts made by well-established lighting providers in the region. For example, in November 2017, Aruba Networks Inc. presented its beacon technology in the AmericasMart in Atlanta, Georgia, which is one of the major wholesale trade centers in the U.S. The company aimed at providing beacon navigation facilities and Wi-Fi technology for the target locations. Thus, these efforts are projected to have a positive impact on the beacon market in North America.

On the other hand, Asia Pacific is projected to grow at healthy CAGR during the forecast period. The major reason for the growth this technology in the region is because of the increasing use of smartphones by the massive population in the region. In addition, iBeacons are adopted greatly on digital billboards malls at in China that is further expected to positively affect the beacon market in coming years.

The report also carries competitive landscape in which various prominent players of the market are mentioned. Some of the leading players in the market are Kontakt.io, Gimbal, Estimote Inc., Radius Networks, Inc., and Aruba Networks Inc.

The “Beacon Market – Global Industry Analysis, Size, Share, Growth, Trends, and Forecast, 2018 – 2026” report provides analysis of the beacon market for the period 2016–2026, wherein the years from 2018 to 2026 is the forecast period and 2017 is considered as the base year. Data for 2016 has been included as historical information. The report covers all the trends and technologies playing a major role in the growth of the beacon market over the forecast period. It highlights the drivers, restraints, and opportunities expected to influence the market growth during this period. The study provides a holistic perspective on the market’s growth in terms of revenue (in US$ Mn) and volume (thousand units) across different geographical regions, namely North America, Europe, Asia Pacific, Middle East & Africa, and South America. The report highlights the key trends affecting the market on a global scale. Furthermore, region wise prominent countries/regions covered in the report includes the U.S, Canada, Germany, France, U.K, India, China, Japan, GCC countries, South Africa, and Brazil.

This report analyzes and forecasts the beacon market at the global and regional level. The market has been forecasted based on revenue (US$ Mn) and volume (thousand units) from 2018 to 2026. The study includes drivers and restraints of the global beacon market. It also covers the impact of these drivers and restraints during the forecast period. The report comprises a detailed value chain analysis which provides a comprehensive view of the global beacon market. Porter’s Five Forces model for the market has also been included to help understand the competitive landscape in the market. The study encompasses a market attractiveness analysis, wherein end-users are benchmarked based on their market size, growth rate, and general attractiveness.

Primary research involves e-mail interactions, telephonic interviews, and face-to-face interviews for each market, category, segment, and sub-segment across geographies. We conduct primary interviews on an ongoing basis with industry participants and commentators in order to validate the data and analysis. Primary interviews provide first-hand information on the market size, market trends, growth trends, competitive landscape, and outlook, etc. These helps us to validate and strengthen secondary research findings. These also help to develop the analysis team’s market expertise and understanding.

The report highlights well established players of the market including Aruba Networks Inc, Gimbal, Estimote Inc., Kontakt.io and Radius Networks, Inc. among others. These key players are looking to capture larger market share by innovating novel beacon lights. For instance, in June 2017, Aruba Networks Inc. has further altered its offerings which uses Internet of Things (IoT), by introducing a location based asset tracking solution in collaboration with its wireless platforms. This can have a positive impact on the beacon offerings of the company. Additionally, in April 2018, Kontakt.io formed a partnership with Cassia Networks, a Bluetooth IoT solution provider to offer enhanced Bluetooth beacon offerings to its customers.