Corn oil is used in edible as well as non-edible applications. Globally, Bangladesh is one of the major consumers as well as importers of edible oil. With the growing demand for edible oil in the domestic market, there is a surge in investment opportunities as far as the production of edible corn oil is concerned. The rising focus of the authorities on decreasing the country’s dependence on imports by increasing local production will prove to be immensely beneficial for the corn oil market in Bangladesh.

On the basis of type, the corn oil market is bifurcated into edible and non-edible. In terms of revenue, non-edible corn oil is expected to account for the leading share throughout the course of the forecast period. The segment is estimated to account for a 71.4% share in the Bangladesh corn oil market by the end of 2016. This is attributed to the increasing usage of corn oil for the production of biodiesel. The segment is expected to expand at a CAGR of 1.7% during the forecast period. 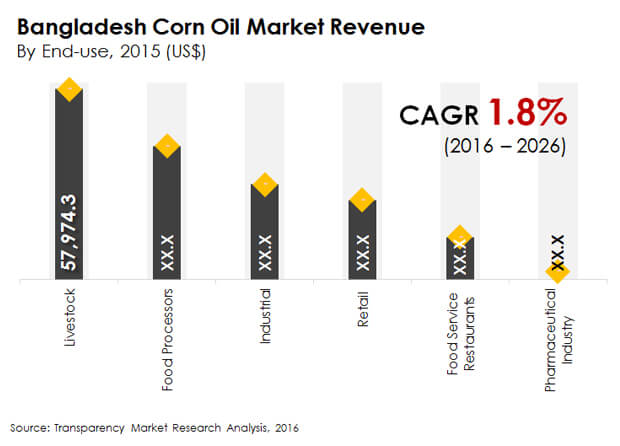 By end use, livestock accounted for the leading share of 34.7% in 2015 and is expected to expand at a modest CAGR of 2.0% during the forecast period. The segment is expected to retain its dominance through 2026. The revenue generated by the industrial segment is expected to report a 2.5% CAGR between 2015 and 2026 – the highest growth rate among other end-use segments. This is attributed to the growing application of corn oil in the manufacturing of biodiesel. The demand for corn oil in the industrial sector is also owing to the increased usage of corn oil in various applications such as rustproofing metal surfaces and in inks, textiles, and paints.

The retail segment, on the other hand, is expected to reflect sustainable growth in the near future. Growing consumer preference for healthy cooking and edible oils in order to lower the risk of heart diseases is expected to support this segment. Promotional campaigns by existing oil manufacturers have had a significant impact on consumers in the country and has created a sense of awareness among them regarding the consumption and benefits of heart-healthy products. Corn oil offers a number of advantages in this regard – lower cholesterol levels and controlled blood pressure levels.

Corn oil is utilized in eatable just as non-eatable applications. Universally, Bangladesh is one of the significant buyers just as merchants of consumable oil. With the developing interest for palatable oil in the homegrown market, there is a flood in venture openings to the extent the creation of eatable corn oil is concerned. The rising focal point of the experts on diminishing the country's reliance on imports by expanding nearby creation will end up being colossally gainful for the corn oil market.

Corn oil has both eatable and non-palatable applications universally while Bangladesh is one of the significant buyer and shipper of the consumable oil. Developing interest for palatable oil is setting out worthwhile open doors in the neighborhood market in Bangladesh for coil oil. These chances are pulling in players to contribute for improving their creation limit and dispersion channel. This neighborhood creation exercises are supported by government as these exercises makes the nation free and lessens the import which is hugely useful for the corn oil market in the country.

The consumable oil portion is relied upon to show considerable development soon. This is driven basically by the changing dietary propensities and improving expectations for everyday comforts of the purchasers. Besides, developing buyer mindfulness with respect to the high nutritive estimation of corn oil is required to help the development of this section throughout the next few years.