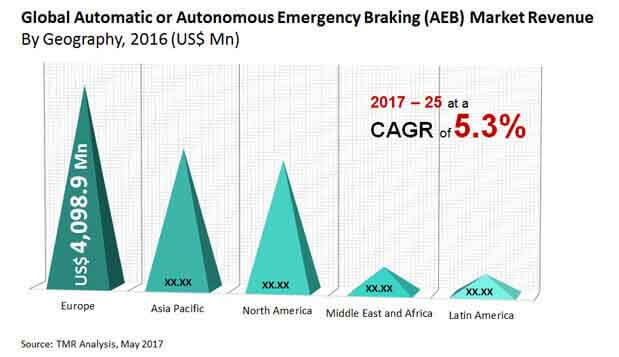 In terms of technology, the global automatic or autonomous emergency braking market has been segmented in the report into forward collision warning systems, dynamic brake support systems, and crash imminent braking. Of these, the segment of forward collision warning systems is presently the most preferred automatic or autonomous emergency braking technology. The segment accounted for a massive 44.6% of the overall market in 2016 and is expected to remain the leading contributor of revenue to the global market throughout the report’s forecast period. The segment is, however, envisaged to lose massively in terms of share in the global market by the end of the forecast period.

In terms of geography the market is segmented into North America, Europe, Asia Pacific, Middle East and Africa, and Latin America.

In the near future, the market in North America is expected to lead in terms of rate of growth. Institute for Highway Safety (IIHS) and the National Highway Traffic Safety Administration (NHTSA) have compelled leading automotive companies to commit to the inclusion of  automatic or autonomous emergency braking systems in all new cars by 2022 and all new trucks by 2025. In the U.S., which is the dominant automotive market in North America, the adoption of this technology is presently low. However, with the voluntary commitments from automakers, the adoption is anticipated to rise significantly.

The brake is the most essential safety equipment in a vehicle. Automatic or autonomous emergency braking system helps to improve safety of vehicles by improving the vehicle’s braking power. In terms of product life cycle this braking technology is in its introduction stage and moving towards the growth stage.

The report provides analysis of different drivers that are impacting the global automatic or autonomous emergency braking market along with restrains and opportunities as per the scope of the report. For each segment (such as technology and vehicle type) market analysis is provided. Additionally taking into consideration all the drivers an extensive geographical growth analysis is provided for the forecasted period has been provided in the report.

Automatic or Autonomous Emergency Braking (AEB) market has been segmented as follows: