Analysts at Transparency Market Research project this trend to remain growing over the next few years, leading to an upsurge in the adoption of wireless intercoms in Asia Pacific. In 2014, the opportunity in wireless intercom across Asia Pacific was worth US$0.4 bn. Rising at a CAGR of 12.30% between 2015 and 2023, it is estimated to rise up to US$1.1 bn by 2023.

Event management, security and surveillance, hospitality, retail, and transportation and logistics are the prime application areas of wireless intercoms. Among these, the security and surveillance segment has emerged as the leading adopter of these intercoms. The rising crime rate has increased the concerns over security among people in Asia Pacific, leading to the growing demand for robust security solutions. Hence, wireless intercoms, being an important part of these solutions, has also witnessed a surge in demand in the recent times.

Looking forward, these intercoms are likely to witness a significant adoption in the security and surveillance, hospitality, and retail sectors in many of the countries in the Rest of Asia Pacific over the next few years. In Japan and South Korea, the application of these intercoms will experience a rise in the event management industry while in Pakistan, Bangladesh, and Sri Lanka, their demand will rise in the security and surveillance sector. 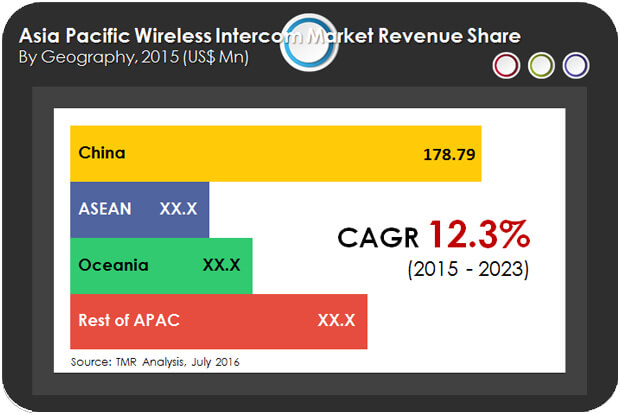 The market is segmented on the basis of technology and industrial verticals where wireless intercoms are used. Wireless intercoms communicate through the radio frequencies (RF), Wi-Fi, and other technologies, such as Bluetooth, providing mobility to the end-user. The RF and Wi-Fi segments are further divided on the basis of frequency range, providing the revenue and volume distribution for APAC. Furthermore, recent technological developments have helped wireless intercom manufacturers increase the range of their and accommodate more belt packs in a system.

The industry vertical segmentation provides a complete range of end-use industries in which wireless intercoms are commonly used. Wireless intercoms mainly find their application in the area of security and surveillance to facilitate internal communication. Security authorities are carrying the belt packs and communicating with each other through the base station as managing the flow of people in and out of a facility is gaining importance owing to the increasing threats. Further, with increases in investment in the areas of hospitality and transportation, the application of wireless intercoms is expected to increase in these areas in the coming years.

The report provides an in-depth analysis of the APAC wireless intercom market based on application/end-use industry, technology, price, and geography. In terms of geographical regions, the report segments the Asia Pacific wireless intercom market into China, ASEAN, Rest of Asia Pacific and Oceania, which are analyzed in terms of revenue generation and volume. ASEAN is further segmented into the Philippines, Indonesia, Thailand, Malaysia, Singapore, Vietnam, Cambodia, Myanmar, and others, while Oceania is divided into Australia and New Zealand.

The Asia Pacific wireless intercom market is segmented as below:Anchor