It is no surprise that food security is gaining prominence world over and is a direct outcome of rapidly growing demand for food and shrinking farmlands. Governments across the world are thus focusing upon this problem area in a major way. As per Transparency Market Research, from 2016 to 2024, the piperonyl butoxide market is set to grow at a moderate growth rate in terms of revenue and demand. And, use of chemicals such as piperonyl butoxide in the improvement of yield will play a significant role in the growth of this market.

This will also manifest itself in the form of higher market worth and an increase in new and lucrative growth opportunities for players operating the playfield. Some of the significant factors that promise to keep the Piperonyl Butoxide (PBO) Market buoyant over the forecast period mentioned above are spelled out below:

The global market for piperonyl butoxide (PBO) is rather consolidated and is primarily driven by the ever increasing demand for food. The rapid increase in the global population has raised food security concerns and several underdeveloped and developing countries still lack proper infrastructure for the storage and distribution of food grains. A significant rise in yield is possible through the usage of crop protection chemicals such as insecticides. This has resulted in the high demand for piperonyl butoxide. 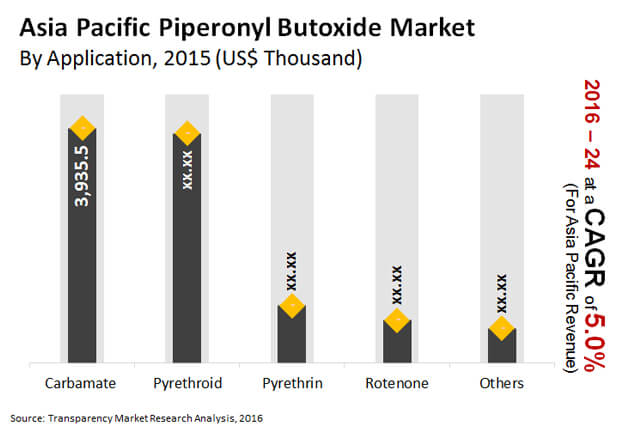 Carbamate to Witness Significant Rise in Demand in the Agriculture Sector

Carbamate is the key revenue generator as well as the key consumer of piperonyl butoxide. Derived from carbamic acid, carbamate is used to control or kill insects and finds application in the agriculture sector as well as in homes. The growing usage of insecticides for crop protection and the rising demand for food are likely to boost the demand for carbamate in the coming years.

China to Lead APAC PBO Market by Volume and Revenue

The Asia Pacific PBO market is segmented on the basis of geography into China, Japan, India, ASEAN, and Rest of APAC. China accounted for the leading share in the piperonyl butoxide market in 2015, accounting for a demand share of more than 45% that year. The growing usage of insecticides for crop protection in the county, coupled with the rising demand for food, is likely to boost the demand for piperonyl butoxide in China. China is not only the leading revenue generator and consumer of PBO, but the country is also expected to expand at the fastest pace over the course of the forecast period.